From Zelda Dungeon Wiki
Jump to navigation Jump to search
Want an adless experience? Log in or Create an account.
Earth Spring 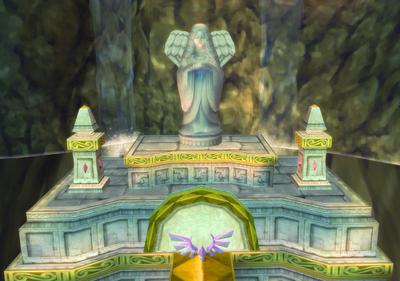 The Earth Spring is one of the two springs in Skyward Sword.[1] It is found at the end of the Earth Temple in the Eldin Province after Link defeats Scaldera.[2] Zelda first heads here to cleanse her body in the waters of the spring.[3][4] Link arrives just in time to see her depart with Impa.[5] Although Zelda wants to speak with him, Impa stops her and allows her to go ahead.[6] Impa then criticizes Link for failing his task to protect her, claiming that he must conquer the challenges given to him by the Goddess before he can help Zelda.[7][8][9]

Fi deciphers a message written in the language of the ancient gods that states that Zelda has headed to Lanayru Desert.[10][11] Link then receives the Amber Tablet, which he must take to Skyloft to create a path to the Lanayru Province.