From Zelda Dungeon Wiki
Jump to navigation Jump to search
Want an adless experience? Log in or Create an account.
Goddess Crest 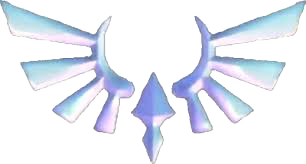 The Goddess Crest is a symbol in Skyward Sword that indicates the goddess Hylia.

The Crest is painted on walls and statues in many areas in the game to portray the goddess and is essential to the story. It can be a physical object in many aspects of the game as well. It is used to progress Link through the game's story by being placed on a pedestal ready for Link to use a Skyward Strike on it. Before the strike, the symbol will be a black color, and after, it will turn a bright purple. Hitting the symbol with a skyward strike often causes a cut scene to trigger, showing a specific message given by Fi. Other cut scenes include upgrading the Goddess Sword, revealing the tablet pedestal Inside the Statue of the Goddess, etc.

The crest is also shown on Goddess Walls that appear when the Goddess's Harp is played near Blessed Butterflies. This is a secret that allows Link to draw an image of their choice on the wall to replace the crest. Certain images release specific items.