From Zelda Dungeon Wiki
Jump to navigation Jump to search
Want an adless experience? Log in or Create an account.
Earth Temple 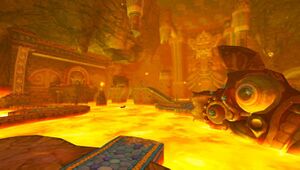 Pyroclastic Fiend Scaldera is the boss of the Earth Temple. When Link obtains the boss key, a large boulder appears and chases him down a hill toward the boss room. It is then consumed by a statue above the boss's door. Upon entering the boss room, Link discovers that this boulder was actually the boss, Scaldera. Scaldera can be defeated by throwing bombs into his mouth when he breathes in and then striking his eye.