From Zelda Dungeon Wiki
Jump to navigation Jump to search
Want an adless experience? Log in or Create an account.
Magma Spume 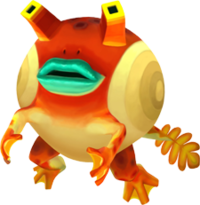 Magma Spume is an enemy that appears in Skyward Sword. They are found exclusively in the Earth Temple. It is one of the three variations of the Spume family, along with the Cursed Spume and Electro Spume. They sit with their eyes sticking out of the lava to detect any danger nearby. As they are cowardly by nature, the Magma Spume flees if Link comes close to it.

The Magma Spume spits out flaming projectiles at Link, which Link cannot deflect with the Sword or Shield; instead, he can only defeat it by using projectile weapons such as Arrows or performing the Skyward Strike at it two times. One strike with the Sword also takes the Magma Spume down, though it is very rare Link can do that. Another simple way to defeat it is to just use the rolling stone balls inside the dungeon to crush it.