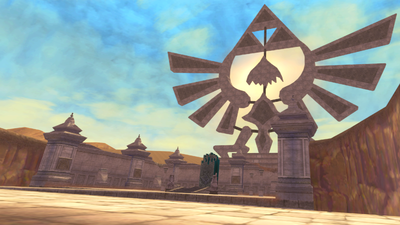 Before the Gate of Time is activated

The Temple of Time is a location found in Skyward Sword

Located in the western Lanayru Desert by the Desert Gorge, the Temple of Time is a walled area open to the sky, with a bridged canyon through the centre and a huge sculpture combining the Triforce and Goddess Crest standing over it toward the back. The central focus of the Temple itself was a Gate of Time, said by Ancient Robots to have been created by the Goddess Hylia[1]. The robots patrolled around the Temple[1] and had a monthly schedule for cleaning it[2].

When Link arrived in the Desert Gorge looking for Zelda[3], he found the Temple entrance blocked off by fallen stone after an explosion[4]. Searching for another way in, he was directed to Lanayru Mining Facility, which was connected to it via an underground passage[1].

After finding and fighting his way through the Mining Facility, he entered the Temple and found Zelda and Impa standing in front of the activated Gate of Time, Zelda playing the Goddess's Harp. The reunion was cut short when Ghirahim attacked and blocked Link with a forcefield. While Impa held him off, Zelda sent the Harp over the canyon to Link, telling him he would need it. With Ghirahim distracted by Impa, the forcefield fell enough for Link to intervene just as the demon was about to kill the Sheikah woman. Impa then fled with Zelda through the Gate of Time- the older woman telling him to see the The Old One at the Sealed Grounds, and the younger woman shouting promises to see Link again - and destroyed it behind them in an explosion to prevent Ghirahim from following.

With his quarry gone, Ghirahim chose to leave rather than fight Link, who was left alone in the Temple. When leaving himself, he met the Goron Gorko, and left him to investigate the Temple[5] while the hero went on his way.