From Zelda Dungeon Wiki
Jump to navigation Jump to search
Want an adless experience? Log in or Create an account.
Ancient Robot 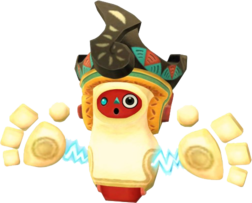 Ancient Robots are a "race" of robots built by an ancient civilization in the Lanayru Desert region. Most of the robots are damaged beyond repair, but one, Scrapper, is still running in the present day. In certain areas of the Lanayru Desert, Link can strike Timeshift Stones, which turns back time inside a small area. Once this happens, Link can talk to the restored robots. They play a major role in the story of Skyward Sword, being one of the races that helped the Goddess protect the land below The Sky. However, ironically, they cannot defend themselves, but are instead capable of lifting heavy objects and completing complicated tasks. Their design is based on a clay doll, as they do not seem to have many metallic features. They run only on electricity and appeared to have high intelligence.

After striking a Timeshift Stone, Link can interact with them, and they will often tell him valuable information about the area while making little robot sounds like "vrrrt" or "pho-weep." The two Ancient robots that are still running at the time (or can run by themselves) are Skipper and Scrapper. The original purpose of making these robots was for mining in the Lanayru area, often trying to dig up Timeshift Stones (which they used for energy purposes). Most of the time when Link activates them, however, they will often tell him they are busy, give him a piece of information in the shortest way possible, and go back to working. Despite being robots, they also seem to have quite a bit of emotion, seeing as they appear to feel fear, anger, ignorance, and joy. A group of outlying Ancient Robots are also the crew of the Sandship, a large and old vessel that once sailed the (since dried up) beautiful Lanayru Sand Sea. They are a very large contrast to the races seen in previous titles because of the fact that they are practically "extinct." They are also one of the first artificially intelligent races in the Zelda series.