From Zelda Dungeon Wiki
Jump to navigation Jump to search
Want an adless experience? Log in or Create an account.
Graveyard 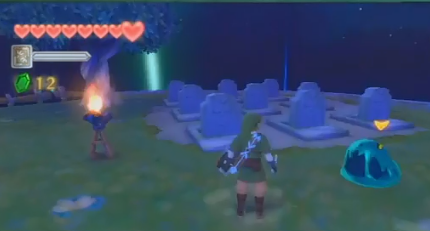 The Graveyard in Skyward Sword is located in the southern part of Skyloft. The Graveyard has a select few graves, and Green ChuChus are found here during the night. If Link pushes one of the graves, a Green or Blue Rupee comes out of it. The Graveyard also has a shed leading to Batreaux's house that can't initially be opened, though later on, Link is able to enter it. After Link has placed the Ruby Tablet Inside the Statue of the Goddess, Kukiel is reported to have gone missing. After Link talks to Rusta over at the Lumpy Pumpkin, he tells Link how he witnessed Batreaux entering the shed to his house by moving the grave near the tree. Only after talking to Rusta, Link can strike his sword at the grave near the tree to reveal a symbol similar to Batreaux's appearance on the grave, and then, Link can push it to open the shed to reach Batreaux's House.