From Zelda Dungeon Wiki
Jump to navigation Jump to search
Want an adless experience? Log in or Create an account.
Waterfall Cave 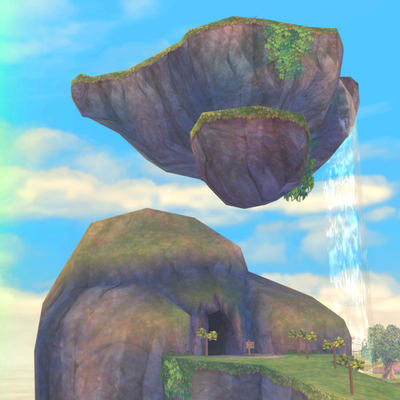 The Waterfall Cave[1], also referred to as just the Waterfall, is a location at the northeast part of Skyloft in Skyward Sword.

Link will first need to travel to the Waterfall Cave when he is searching for his Crimson Loftwing. After getting the Practice Sword from Eagus, he can chop down the small trees that block the entrance to the cave. Inside, Link will encounter some rather simple enemies, along with some bugs, and some secret rupees. Traveling through the cave is the only way to reach the small outdoor land area just beneath the Waterfall. Link will find is Loftwing here and later on the quest, he will also find two Gratitude Crystals.

Link will encounter some of the first enemies in the game within the Cave. The cave is home to some Green ChuChu along with some Keese. Early on in the quest, it will take multiple sword slashes with the Practice Sword to defeat a Keese, while a single sword slash takes care of a Green ChuChu. These are good sources for rupees early on in the quest, and if you would like to grind for Treasure, the Green ChuChu and Keese will leave behind Jelly Blobs and Monster Claws.

There are two treasure chests, each containing a Red Rupee. Furthermore, there is a crawl space near the end of the cave that has two red rupees. 80 rupees very early on in the quest are valuable for purchasing items at the Bazaar.

There are three different bugs that can be found within the Waterfall. A Starry Firefly can be found above the water at the end of the first corridor. A Skyloft Mantis can be found at the end of a second corridor. Later on in the quest after completing the Skyloft Silent Realm, a few Blessed Butterflies can be found in the cave at night. Playing the Goddess's Harp near them will cause the Moonlight Merchant to appear, allowing Link to purchase some rare treasure.