From Zelda Dungeon Wiki
Jump to navigation Jump to search
Want an adless experience? Log in or Create an account.
Sheikah 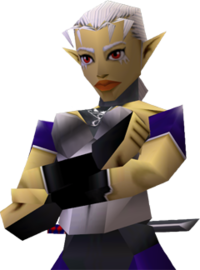 The Sheikah are one of the classic races of The Legend of Zelda series. They were an advanced civilization with power and wisdom that saved Hyrule time and time again.[1] They seem to live in a state of perpetual near-extinction. One Sheikah in particular, Impa, has appeared regularly since the original The Legend of Zelda.

In the future, Princess Zelda disguises herself by dressing as Sheik, a male Sheikah, and appears often in order to guide Link throughout his journey. She teaches Link the six warp songs, in addition to revealing some of Hyrule's history.

The Sheikah are mentioned in Twilight Princess, and two Sheikah do appear: Impaz, a descendant of an incarnation of Impa, and Fanadi, a fortune teller who resides in Hyrule Castle Town. It is revealed that the Sheikah once acted as mediators between the Hyrulean Royal Family and the Oocca, a tribe of Cucco-like, sky dwellers.

The Sheikah Tribe dwell primarily in Kakariko Village in Breath of the Wild. Impa resides here also, living with her granddaughter, Paya, in the biggest house in the village, with guards outside. Unlike previous installments, which featured only one or two Sheikah, if any, the Sheikah here are seen as a large, thriving race. 21 regular Sheikah can be encountered, as well as 144 Sheikah Monks. Sheikah are easily distinguishable by beige, red and navy blue clothes, as well as head-mounted umbrellas, both of which may only be worn Sheikah, and no-one else, including Link.[2][3] For the first time, Sheikah are met who don't belong to the Sheikah Tribe. They are the hundreds of Yiga Clansmen who unwaveringly wage war upon all other Hyruleans, including Sheikah Tribesmen, in the name of Calamity Ganon.