From Zelda Dungeon Wiki
Jump to navigation Jump to search
Want an adless experience? Log in or Create an account.
Olkin 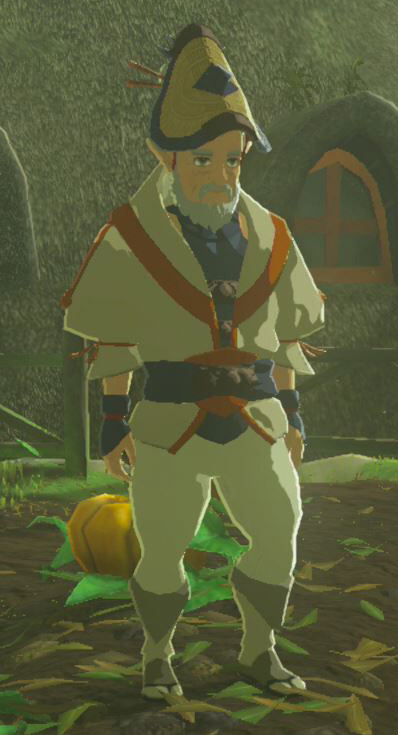 Olkin is a character found in Breath of the Wild.

Olkin has a bitter rival in the form of Steen. Steen grows Swift Carrots and has a belief that a strong offense is a good defense. Where as Olkin believes in a strong defense, showcased by the fact that he grows Fortified Pumpkins, which grant a Defense Boost when cooked. Olkin refers to Steen as a savage old man who can't stop talking about a strong offense. [1][2][3]

Olkin awakes at 6am each morning and spends most of his day managing his pumpkin patch.[4] Olkin will tell Link about how Fortified Pumpkins increase defense and the more that are in the dish, the higher effect it has.[5][6] Fortified Pumpkins are available for sale for 20 rupees a piece.

At 5pm each evening, Olkin and his wife Mellie will meet just outside their home, at their outdoor wood stove, where Mellie will cook a meal.[7] Olkin will comment that his wife's dishes are out of this world due to the amount of Fortified Pumpkins that are in the recipe.[8]

At 8pm, Olkin will be full of energy and will go for a jog around town.[9][10] Olkin will tell Link about the secret art of defense, showcased by the shrine that sits about the village. The Ta'loh Naeg Shrine will teach Link about the Perfect Dodge and Perfect Guard. While Olkin is not familiar with these methods, he wants to stay vigilant, being ready for when that trial presents itself.[11]

Olkin's rivalry with Steen gets the best of him during these late night hours. When going for his job, Olkin will trample all over Steen's carrot garden and is ashamed when Link catches him.[12][13] Although if Link says he didn't see anything, Olkin laughs and continues to trample all over the garden.[14] He seems embarrassed and tells Link a story about how when he use to go hunting with Steen, Olkin preached patience, where as Steen would run ahead, causing the prey to run away. More so than that, Olkin seems really upset that Steen and his wife Trissa will not sell his pumpkins at the High Spirits Produce, the general store at the west end of the village.[15] Despite getting caught and stating that he's no longer going to stomp on the garden, his grudge with Steen gets the best of him and he continuous to damage the garden.[16]

Around 3am, Olkin will return home to go to bed. If Link is standing in the door facing inside, Olkin will creep up behind him and get scared that Link he in his home.[17] At nighttime, Olkin can be seen dreaming about how pumpkins are better than carrots, and also about how he will protect his wife.[18]