From Zelda Dungeon Wiki
Jump to navigation Jump to search
Want an adless experience? Log in or Create an account.
Koko 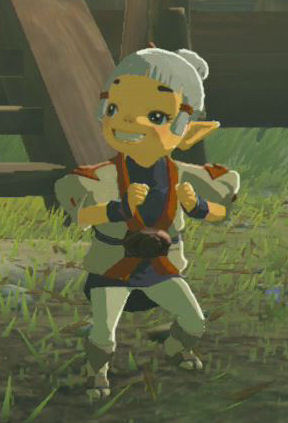 Koko is a character from Breath of the Wild.

Koko lives in Kakariko Village with her younger sister Cottla and her father Dorian. She is an aspiring chef and wants to someday be like her deceased mother. Koko lives with her family in the home located at the north part of town, just northeast of the Enchanted Armor Shop. She will sleep at nighttime in the same bed with her younger sister Cottla. She is an illeist, as she regularly refers to herself in the third person.

While she appears to be close in age with her sister, Koko is much more mature and has a better understanding about life. Koko is an early riser, waking up at 5am right alongside her younger sister. Each morning, Koko will run over to the grave where her deceased mother lays to rest, located just outside the village on the path north from Impa's home.[1] She stays there until 8am, crying in front of the grave.[2] She reveals that her father has not told the kids about the passing of her mother, but Koko is aware that she is gone and is hopeful that she is making friends in Heaven.[3] She knows that her father is lying, but is also protective of her younger sister Cottla, as she is too young to understand what happened with her mother.[4]

Just before 9am, Koko will run back over to her home and meet with her father and sister, sitting beneath a tree that her mother once loved.[5][6] At 11am, Koko gets up and will make here way over to her cooking pot, just south of Impa's house.[7] If at anytime between 11am and 7pm it begins raining, Koko will take shelter within the Shuteye Inn, sad that she is not able to cook.[8]

She will remain at the cooking pot for much of the day, returning home at 7pm to wait for her father.[9] She tries to stay awake until her father arrives, with her younger sister falling asleep before her. She too will sleep around 9pm, still mumbling about waiting for her father to get home.[10] There is no animation for Koko to actually go to bed and she'll only go to sleep if Link is out of the house and out of sight. Otherwise she will remain, just sitting on the bed until morning when she gets up for the day.

When Link speaks with Koko while she is standing by her cooking pot, Link can begin a number of Side Quests that involve cooking food. She will need Link to bring her some ingredients so she can cook meals. At any point Link can refuse to give her the ingredients, although this makes Koko sad and she refers to Link's comment as cold.[11] Koko enjoys cooking and strives to be a great chef, just like her mother.[12][13]

After completing all of the cooking quests with Koko she decides that she wants to become a chef when she grows up. With all four of the meals that she made, she relied on other Mother's recipes. She now wants to come up with her own recipes, but acknowledges that this is not an easy task.[14]

When Link first speaks with Koko, she is trying to make Veggie Cream Soup for her younger sister Cottla. However, she does not have Swift Carrots.[15][16][17]

After completing Koko's Kitchen, Link can speak with Koko once again to start the Cooking with Koko quest. This time, Koko is in need of some Goat Butter for the Hot Buttered Apple she wants to make.[20][21] She is sad when Link tells her to cheer up, asking for the material instead of Link's sympathy.[22]

When Link gives Koko the Goat Butter, she will be ecstatic, thanking Link for providing the Goat butter.[23] As a reward for doing so, Koko will provide Link with a dish of Hot Buttered Apple.[24]

After completing Cooking with Koko, Link can speak with Koko once again to start the Koko Cuisine quest. This time, Koko is in need of some Raw Meat in order to cook some Tough Meat-Stuffed Pumpkin.[25][26] She is sad when Link tells her to cheer up, stating that she feels so empty without raw meat.[27]

After giving Koko some Raw Meat, Koko will be very thankful and will cook up some Tough Meat-Stuffed Pumpkin.[28] As a thanks for helping her out, Koko will give Link a dish of the meat-stuffed pumpkin.[29]

After completing the Koko Cuisine, Link can speak with Koko once again to start the Koko's Specialty quest. Koko is in need of some Courser Bee Honey in order to make some Energizing Honeyed Apple.[30][31] She is sad when Link tells her to cheer up, stating that Link's words aren't helping and that she really needs some honey.[32]

After Link brings some Courser Bee Honey, Koko will be both thankful and sad, as she will cook some Energizing Honeyed Apple, but it reminds her of her deceased mother.[33][34] She will give Link a dish of the dessert for his help.