From Zelda Dungeon Wiki
Jump to navigation Jump to search
Want an adless experience? Log in or Create an account.
Cottla 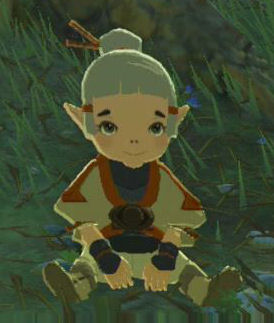 Cottla is a character from Breath of the Wild.

Cottla lives in Kakariko Village, along with her older sister Koko and their father Dorian. Cottla is younger and more ignorant to her surroundings than her older sister. Dorian has not been honest with his children, not telling Cottla and Koko about their mothers passing. Instead, he lies to them, although Koko is aware of this, while Cottla is more oblivious.[1][2]

Cottla wakes up early in the morning, right at 5am. She'll immediately start running around town, looking for her mother, thinking that she's hiding somewhere.[3][4] Cottla makes her way up the cliff and stanrds just outside of Ta'loh Naeg Shrine. If Link asks to play with Cottla at this time, she will say no, as she is playing with mommy.[5]

At 8am, she'll head back down the cliff and will sit beneath a tree just outside of their home.[6] If Link asks to play at this point, now Cottla has turned her attention to her father.[7] Cottla is wondering when her dad sister are going to arrive.[8]

At 11am Cottla will get up and will begin run around. She runs in set path around town, crossing the various bridges. She's hungry and bored, but will want to play with Link.[9][10][11] She'll generally run around ner the center of town

At around 5pm, Cottla will run over to where her sister Koko is cooking so she can eat dinner.[12] Cottla will not want to play during dinner time.[13] At 7pm, Cottla will head on home and gets to bed right away.[14][15] While sleeping, Cottla will be dreaming about Mommy, Daddy, and her sister.[16][17][18]

While Cottla is running around, beginning from 11am until 5pm, Link can talk to her and agree to play Hide-and-seek or Tag. This will begin the Playtime with Cottla quest. If Link plays hide-and-seek, Cottla can be found sitting on the wood platform, right behind Impa's house.[19] If Link finds Cottla, she will reward Link with some Rock Salt.[20]

If Link agrees to play Tag, Link will appear somewhere in the village and Cottla will be off straight ahead. Run ahead quickly and you'll likely find Cottla. It's fairly easy to catch her.[21][22]