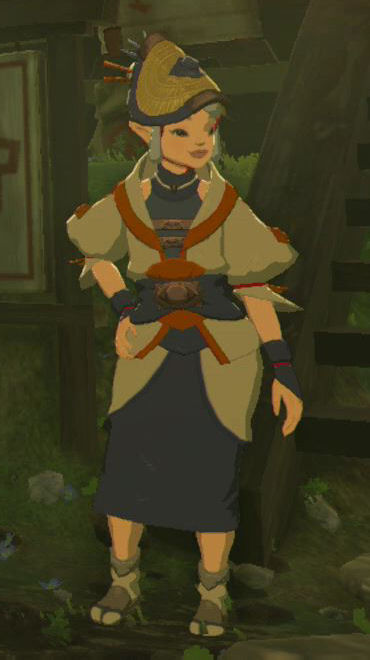 Lasli standing outside of Enchanted

Lasli is a character in Breath of the Wild.

Lasli works as a greeter, standing outside of the Enchanted Armor Shop, greeting customers and encouraging them to come on in.[1][2] When first approached, she will immediately react to Link and develops a crush on him, as Link is exactly her type. Lasli will quickly realize that Link has a Sheikah Slate and thinks that Link is even more important and incredible than he looks.[3]

Lasli wears the traditional Sheikah garb that many of the residents of Kakariko Village can be seen wearing. Her outfit is identical to the shop-owner of Enchanted, Claree.

Lasli leaves her house at and heads off to work at 5am.[4] She remains there throughout the entire day and at 9pm each evening, Lasli will take off from her spot outside of Enchanted and run to her home. She hurries home so that her grandmother Nanna does not get worried.[5] She lives in the home just to the left when Link enters Kakariko Village.

At her home, Lasli professes her love for Sunset Fireflies. She use to catch them when she was much younger and teaches Link that the trick is to sneak up on them very slowly.[6] She can't go out at nighttime anymore due to the monsters that are nearby as well as the Yiga Clan that has been spotted nearby.[7]

In the Kakariko Graveyard lies Lasli's dead Sheikah boyfriend named Jarod, who was slain by a monster protecting her. She acts as if it was a mere breakup from a toxic relationship to save her from having to explain the truth.[8][9][10]