From Zelda Dungeon Wiki
Jump to navigation Jump to search
Want an adless experience? Log in or Create an account.
Oocca 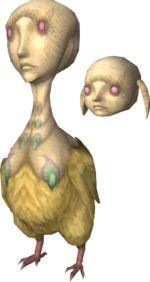 The Oocca are an ancient race of bird-like creatures that are only seen in Twilight Princess. Ooccoo and Ooccoo Jr. are the only named members, and thus are the only notable members of this race. An Oocca's appearance can be compared to a bowling pin: a wide bottom with a skinny midsection and a medium-sized head. Oocca have a bird's feet along with the tail of a duck. Younger Oocca seem to be only floating heads.

Not much is known about the origins of the Oocca. They are first mentioned by name by Shad, a member of The Resistance that lacks physical skills, but makes up for it with his high knowledge of the history of Hyrule and book reading.[3][4] The first time Link visits Telma's Bar, the meeting place of the Resistance, after he has completed the Lakebed Temple, Shad is sitting at the table at the back of the bar, alongside Ashei and Rusl. Link can talk to Shad, who discusses the Oocca, saying he is currently very interested in them.[5] He starts by telling a very brief history of the Hylians, stating them to be the closest race to the gods, according to legend.[6] However, also according to legend, long ago there was a race that was even closer to the gods, and they were even said to have created Hyrule.[7] Additionally, while they were creating Hyrule, they built themselves a new capital, a city in the sky.[8] Furthermore, Shad concludes his lecture by saying that some scholars still believe the Oocca live there, somewhere in the great sky.[9] This short conversation is the most information available to be learned on the Oocca in the game. Other bits and pieces are touched upon later, but none are even remotely close to the information available here.

The design of the Oocca closely resembles the work of a Dutch artist named M. C. Escher. Most members of the race look identical; apart from the children, who look much different. It is unknown if there are any differences between the male and females.

Only a few of the Oocca actually talk to Link. Ooccoo and Ooccoo Jr. both speak Hylian to Link, and not their native language of Sky Writing. However, once Link enters the City in the Sky, he speaks with the Oocca Shop owner, who at first speaks in the sky language. This language sounds very much like the gobble, gobble sound made by the real-life turkey. Link hears the Oocca talking in this language throughout the city, particularly when he lifts them over his head. It is unclear if they are protesting or encouraging him.

Another characteristic of the Oocca is their ability to fly. Link can use them to cross gaps, much like Cuccos are used. This ability is used only within the City in the Sky. Additionally, many Oocca around the city can be found climbing on walls. 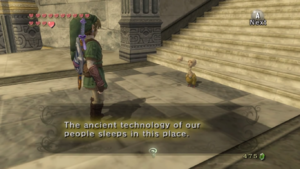 Later on in the game, Link travels to the Faron Woods in search of Rusl, who according to Telma went to Hyrule's southern wood to "check out the lay out of the land."[10] Upon finding Rusl in the area just south of the Forest Temple, Rusl tells Link of an ancient temple deep in the woods that guards a sacred power.[11] He explains that the ancestors of the Hylians built that temple, and that signs of their civilization are everywhere.[12] Although he does not explicitly state he is talking about the Oocca, it is confirmed later by none other than Ooccoo, a member of the Oocca. This confirmation occurs while Link is in this ancient temple, the Temple of Time. In the first room of this dungeon, Link meets Ooocoo. She states that the "ancient technology" of her people sleeps here.[13]

Messenger to the Heavens

During the Sky Cannon quest, Link at one point visits the Hidden Village in order to speak with its lone inhabitant, Impaz. After showing her the Dominion Rod, she tells Link a short history of the Oocca and their connection to the Royal Family of Hyrule. She begins by telling Link about a story from the legends of her clan, from a time when the Oocca still maintained contact with the Royal Family.[14] This story says that a mysterious rod was handed down from the people in the sky, the Oocca. This rod is called the Dominion Rod.[15] Additionally, it is said that the rod was only to be carried by the messenger to the heavens when the royal family needed to communicate with the Oocca.[16] However, it is unknown why the royal family would ever need to communicate with the Oocca. Impaz concludes by stating that by royal decree her ancestors have guarded the book that was to be given to the messenger to the heavens.[17] With this book, Link can obtain the word that allows him to reach the Sky Cannon, and, subsequently, the City in the Sky.