From Zelda Dungeon Wiki
Jump to navigation Jump to search
Want an adless experience? Log in or Create an account.
Bulblin Fortress 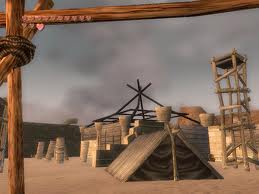 The Bulblin Fortress is a location that appears in Twilight Princess. It is a large encampment where numerous Bulblins reside alongside their leader, King Bulblin. It is situated within the far end of the Desert Province and guards the entrance to the Arbiter's Grounds.

During Link's quest to find the entrance to the Twilight Realm, he must travel to the Arbiter's Grounds where the Mirror of Twilight is said to be located. Unfortunately for Link, a large Bulblin encampment blocks the path to the temple. Link, to access the fortress, must ride a Bullbo to destroy the barricades that guard the camp. Inside there are multiple Bulblins patrolling the ground area as well as Bulblin Archers who watch over the area on top of tall watchtowers. Link must use his stealth abilities to take out the Bulblins from a distance. This is a lot easier if Link has the Hawkeye attachment on his Bow. If Link is spotted by one of the archers, an endless horde of Bulblins attack Link seemingly out of nowhere, which makes the task much harder.

Towards the back of the encampment, there is a Bulblin next to a Bullbo roasting over a camp fire. When Link takes him out, the Bulblin drops a Small Key, which gives Link access to a large door that was previously locked. Additionally, Link can strike the cooking Bullbo to obtain a Piece of Heart. With key in hand, Link enters the door to find a lone Bullbo inside; however, King Bulblin suddenly appears and attacks the young hero. Once Link has defeated the Bulblin leader, he can then ride the lone Bullbo to knock down the barricades that allow him to exit the fortress and access the Arbiter's Grounds.

Stage 1-3, Arbiter's Grounds: Ranger in the Nintendo of America version or Bulblin Hideout Raid in the Nintendo of Europe version takes place in the Bulblin Fortress. The stage is loosely based on the Twilight Princess events, above, but simplified such that Link merely needs to kill 25 Bulblins.