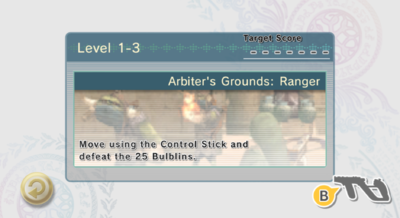 "Move using the Control Stick and defeat the 25 Bulblins"

Arbiter's Grounds: Ranger (Bulblin Hideout Raid in the European/Australian version) is the third and final stage of Level 1 in Link's Crossbow Training. It is a "Ranger" stage played in third person, where Link can be seen by the player, and can move freely throughout the area.

The primary targets are 25 Bulblins scattered throughout the stage, including Bulblin Archers stationed on tall scaffolds - these give 150 points a piece, plus killing all 25 will give a bonus of 500 points times a multiplier. Being hit by a Bulblin or fire arrow will trigger a 100 point penalty and reset the multiplier. The timer does not end when all Bulblins are downed, and any time left over can be spent on secondary targets.

These secondary targets include a Scarecrow, two Orange Rupees hidden in jars, two roast Bullbos and various other skulls, crates and jars which can be shot for additional points.