From Zelda Dungeon Wiki
Jump to navigation Jump to search
Want an adless experience? Log in or Create an account.
Zora's Throne Room 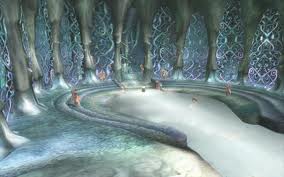 The Zora's Throne Room is a location that appears in Twilight Princess. The throne room of the Zoras, it thus has a large chair at the head, which Queen Rutela presumably occupied before her death.

When Zant gained his power, in order to stop the Zoras from interfering with his plan, he raided and froze over Zora's Domain. During the raid, Queen Rutela was executed before her people by "the dark ones" in this throne room.

After Zant had frozen Zora's Domain and its people, Prince Ralis, fled to contact Princess Zelda. On his way to Castle Town, Prince Ralis was attacked, but fortunately saved by Ilia.

After these events, Link and Midna arrive at Zora's Domain and unfreeze it using a giant Molten Shard of rock from Death Mountain. From underneath the ice sheet, a number of Zoras are set free and the water flows back into Lake Hylia. If Link later blows this up with a Water Bomb, a rather confused Goron is revealed, who will give Link a Bomb Bag

In the credits, Ralis can be seen sitting on the throne, with Queen Rutela's ghost watching over him.