From Zelda Dungeon Wiki
Jump to navigation Jump to search
Want an adless experience? Log in or Create an account.
Barnes Bombs 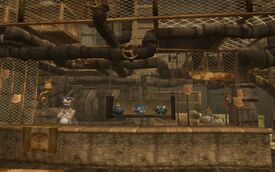 Barnes Bombs is a shop that makes its only appearance in Twilight Princess. It is one of two shops found in Kakariko during the day, along with Malo Mart. It is the local Bomb Shop of the Eldin Province, and for most of the game is the only Bomb shop available to Link.

Before the Shadow Beasts attack on the village, Barnes operated his store using supplies given to him by the Gorons from Death Mountain. However, along with this attack, the Gorons started to act differently. They suddenly started treating Kakariko residents as if they were foes, when previously they had been friends.[1] Because of this, Barnes was unable to gather supplies, and thus closed down shop.[2] Another factor to him closing down shop is the fact that after leaving the Sanctuary, he noticed his storage shed had been blown to pieces. This, of course, was done by Wolf Link, as he was searching for the Tears of Light.[3]

Once Link has completed the Goron Mines and saved Darbus, the Gorons rekindle their friendship with the Hylians. They now allow humans into their home, some Gorons even come down and spend some time in the village. Because of this renewed relationship, Barnes is able to open up shop again.[4] At first, he only has one type of Bomb available for purchase, the standard kind. However, as time progresses, he starts selling two more types: Water Bombs and Bomblings. Water Bombs only appear once the Twilight has been cleared from Lanayru Province, and the Bomblings appear once Link has acquired the Master Sword.

Barnes Bombs is located in Kakariko Village to the very far north, just south of the entrance to Death Mountain. It is located very close to a Twilight Portal, making it simple to warp there if Link needs bombs urgently.

Barnes Bombs sells a wide variety of Bombs, all within a reasonable price. Early on in the game, this was the only shop around that sold Bombs, so it was Link's primary source for anything and everything Bombs.

The Bomb Buyback Counter[5] is a sub-division of the shop. Here, Barnes will buy back unwanted Bombs from Link.[6] This service is great if Link wants to put a different type of Bombs in a certain Bomb Bag, as it allows him to empty an entire Bomb Bag. The prices are less than what Link bought them for, so it cannot be used to make any money.