From Zelda Dungeon Wiki
Jump to navigation Jump to search
Want an adless experience? Log in or Create an account.
Bomb Shop 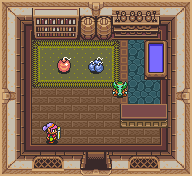 The Bomb Shop from A Link to the Past

The Bomb Shop is a recurring shop in The Legend of Zelda series. It specializes in Bombs and its different varieties.

The first time a Bomb Shop appears is in A Link to the Past, in the Dark World as the counterpart to where Link's House is in the Light World. It is owned and operated by the elephant-like fellow called the Bomb Shop Owner, and sells up to 30 bombs to customers.

Once Link has rescued the Maidens from the Ice Palace and Misery Mire, the Bomb Shop starts to stock Super Bombs. These Super Bombs allow Link to blow open the way to the Mysterious Pond at the base of the Pyramid of Power, home to the Cursed Fairy who will bestow Link with the Silver Arrows and Golden Sword.

Although no shops in Ocarina of Time specialize in bombs, the Goron Shop, owned & stocked by the Goron Shopkeeper and located on the bottom level of Goron City, sells many different quantities of bombs as well as recovery items and the Goron Tunic. These quantities include the typical 5, 10, and 20 bombs that are sold in some stores in the series. There is also another shop similar to the Bomb Shop located in the Back Alley of Castle Town Market known as the Bombchu Shop. The Bombchu Shop only opens during night. This shop exclusively sells Bombchus, a self-propelled variant of the bomb. Unlike most stores in Ocarina of Time, the stock of the Bombchu Shop is limited due to Bombchus' limited availability in Hyrule. Once Link has purchased one bundle of Bombchus, they will be sold out for the duration of the game. Link can also purchase Bombchus from the Carpet Merchant found in the Haunted Wasteland. His Bombchu supply is never sold out. However, the price for 10 Bombchus is a staggering 200 Rupees.

The Bomb Shop from Majora's Mask is found in West Clock Town. It sells bombs as well as Bombchus, and Link can first find the Bomb Bag here. Later, after Link has received permission from Medigoron in Goron Village, he can purchase Powder Kegs as long as he is in Goron form.

Inside view of the Bomb Shop from The Wind Waker

In The Wind Waker, the Bomb Shop is located in a secluded part of Windfall Island and is owned by Bomb-Master Cannon. At first, the prices are too high for Link to purchase any bombs, but later, he lowers them after Tetra's Pirates tie him up and steal some of his merchandise. Beedle also sells bombs after this incident.

Prices for the Bomb Shop are as follows:

A Bomb Shop called Barnes Bombs can be found in Kakariko Village in Twilight Princess. In addition to regular bombs, Barnes sells Water Bombs and Bomblings. He will also purchase any unwanted bombs in Link's Bomb Bag.