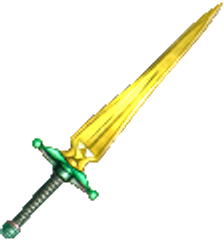 The Golden Sword is an item in A Link to the Past. It is the final form of the Master Sword.

"Golden Sword
The Fat Faerie, who resides within the Dark Pyramid, is the only one who can give Link the Golden Sword. Link should toss the Tempered Sword into her pond. The Fat Faerie will ask Link if he dropped the Sword. Remember, always respond to Faeries with a truthful answer. "

The Golden Sword is the ultimate form of the Master Sword, and as such it is the most powerful. After Link gets it Tempered by the blacksmith brothers east of Kakariko Village, he can use a Super Bomb in the large crack at the Pyramid of Power to open an entrance to the Cursed Fairy's Mysterious Pond. If he throws his sword into the pond, and admits he did so, she will "give him something better in return", in the form of the Golden Sword.[1]

The Master Sword can only be accessed in Week 4, after collecting seven Ancient Stone Tablets — in earlier weeks, the grove in the Lost Woods is inaccessible, blocked by a soldier; and the sword cannot be pulled from its pedestal before the completion of Level 7.

When the Hero of Light pulls it, it is still in the form of the Golden Sword, as it was when Link last wielded it.