From Zelda Dungeon Wiki
Jump to navigation Jump to search
Want an adless experience? Log in or Create an account.
Magic Hammer 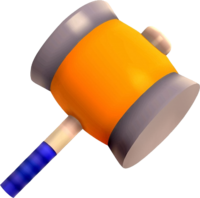 "Magic Hammer:
Using the Magic Hammer, Link can drive stakes down into the ground. He can use it to pound on other things, too--like enemies! The Magic Hammer can deliver a powerful blow."

The Magic Hammer is a type of Hammer that appears in The Legend of Zelda series. Although the word "magic" is in the title, it does not use up any magic from Link's Magic Meter in either game. The Magic Hammer is used in solving many puzzles and can be used to attack or sometimes stun enemies.

"A Powerful Blow
There are plenty of enemies who can be destroyed by using the Magic Hammer. The only drawback to using it is its range of motion. It's very short."

The Magic Hammer first appears in A Link to the Past. It is found in the Dark Palace and can be used to help defeat that dungeon's boss, the Helmasaur King. It is useful for defeating enemies, flipping them over by pounding it on the floor, or penetrating their shells with direct hits. It also works for whacking down "mole heads" and flattening other various things blocking Link's path, such as certain stakes. Its main limitation is its short range.