From Zelda Dungeon Wiki
Jump to navigation Jump to search
Want an adless experience? Log in or Create an account.
Monster Horn

Monster Horn is a material and treasure dropped by enemies in the The Legend of Zelda series and spin-offs, particularly from the Blin line.

"You got a Monster Horn! This well-crafted horn is made of sturdy animal bone. You might find a use for this as a material."

In Skyward Sword, monster horns are commonly carried by Bokoblin leaders. Despite serving as a battle horn, it is rather difficult to produce sound from it.[2] Link can collect these after defeating a Bokoblin leader, or by using the Whip to steal it.[3][4][5] Monster Horns can also be won in mini-games and found in various treasure chests.

Monster Horns are collectible treasures found in A Link Between Worlds. They are commonly dropped by enemies, and can be found in tall grass, skulls and pots throughout Hyrule, Lorule and their dungeons.

After collecting 10 of these Link can travel to the Witch's Hut and the Witch will make them into a Yellow Potion.

In Breath of the Wild, Monster Horns are used by Bokoblin and Lizalfos sentries on watchtowers or other elevated areas in Monster Camps to sound the alarm and warn their allies that Link is nearby when they spot him. However they will not blow their horns if they spot him while he is wearing a Bokoblin Mask (affects Bokoblins only), Lizalfos Mask (affects Lizalfos only), or Majora's Mask (Bokoblins, Moblins, and Lizalfos), however Link's disguise will fail if he attacks them or any of their allies or if the mask he is wearing only affects one type of enemy and he is spotted by an enemy that it does not affect (even Majora's Mask can fail if he is attacked by a Chuchu, Pebblit, or Keese as the mask does not effect them).

Most sentries that wield them carry bows in order to attack Link from their vantage point. The only way to stop them from blowing their horn is to kill or attack them, though this may alert other sentries. Like other enemies, Sentries have a "?" mark gauge that appears over their head that slowly fills when they notice Link, forcing him to seek cover, get out of their field of vision, or kill them before they are completely alerted to his presence and blow their horns which is indicated by being a yellow "!" exclamation point that appears after the "?" mark gauge fills. When wearing a mask that disguises Link, this still occurs but the disguise (if they are affected by it) will causing them to view Link with curiosity rather than as a threat and will continue to watch his movements from their vantage point, which means Link must be careful not to do anything that will cause his disguise to fail, or they will realize he is a threat and blow their horns, alerting their comrades. Unlike other enemies, sentries stand watch over camps at night, while the others (Bokoblins and Moblins) sleep, as Lizalfos do not sleep. Link can identify sentries by the monster horns they carry, especially the ones not standing on watchtowers.

Unlike past titles, these Monster Horns cannot be obtained or used by Link himself. Monster Horns carried by Bokoblin resemble the horns used in Skyward Sword, however the ones wielded by Lizalfos resemble conch shells. 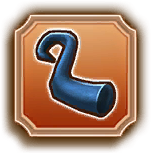 It is used to create badges and mixtures in the Bazaar as a silver material. Badges that the material creates varies based on the character being upgraded.