This article is about the item in The Wind Waker. For the material in Hyrule Warriors games, see Pirate's Charm (Hyrule Warriors). 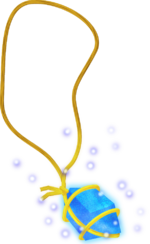 The Pirate's Charm is an item from The Wind Waker. It was crafted by the King of Hyrule, Daphnes Nohansen Hyrule, from ancient Gossip Stones, and was entrusted to Princess Zelda.[1] First known as the Royal Amulet, it was used by the Royal Family of Hyrule to communicate with each other. It has passed through their lineage as an important inheritance.[2]

Tetra gives the charm to Link just before he infiltrates the Forsaken Fortress.[3] During the Endless Night, after Link acquires the Bombs from Niko, Tetra will contact Link through the Pirate's Charm. She suggests searching for Jabun in a cave behind Outset Island, but Link will need to break down the door. Tetra gives Link a head start in the race for Jabun's Treasure, saying that the pirates are setting sail in the morning, but if Link gets their tonight, it's all his.[4]

Tetra has the ability to see everything that Link does while he uses it, as well as speak with him and give him advice.[5] Later, the King of Red Lions uses it to speak with Link as well. These characters at times give Link advice during dungeons, making the charm comparable to previous companions like Navi.