From Zelda Dungeon Wiki
Jump to navigation Jump to search
Want an adless experience? Log in or Create an account.
Secret Grotto 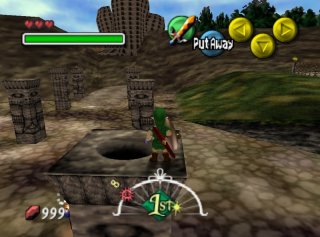 Grottos, also known as Hidden Holes, Dig Caverns, Secret Grottos, Secret Caves, and Secret Caverns are recurring underground chambers of varying sizes found within The Legend of Zelda series. Appearing in Ocarina of Time, Majora's Mask, The Wind Waker, and Twilight Princess, these underground areas are scattered all over the place in said games with some not being accessible right away and are all exited from through a column of light that shines down whence Link entered. 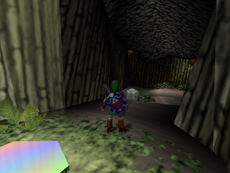 An average Grotto in Ocarina of Time.

In Ocarina of Time, Grottos appear all over Hyrule, some being out in the open while others are hidden or needed to be accessed through other means such as the use of a Bomb or by playing the Song of Storms. In this game, the basic Grottos typically house a small chest, a small pool with Fish, stones which bugs hide under, some grass and a Gossip Stone.

However, in some cases, they lead to much larger chambers or chambers that contain something of importance. In rare cases, Link may find himself in a Grotto that has a cow in it.

In Majora's Mask, Grottos appear in various areas around Termina. Like in Ocarina of Time, some cannot be accessed right away while others can be found out in the open. Unlike the aforementioned Grottos that contain enemies and even Heart Containers, these Grottos can be found much more often. Sometimes, Magic Mushrooms can be found within the basic Grottos in this game. However, if Link does not have the Mask of Scents yet, this will not be apparent and he will not be able to find any of them.

In The Wind Waker, Grottos appear on the many islands scattered around the Great Sea. Unlike previous games, these Grottos are all large underground chamber-like areas present within the lower portions of whatever island Link enters them on. Usually, enemies or a puzzle await the young hero whenever he decides to check out one of these caverns. A notable Grotto found within this game is the one positioned on Outset Island which houses the Savage Labyrinth. Link is first forced to go through some of the floors of this cavern in order to obtain one of the Triforce Charts. After this, it can be explored through completely in order to obtain a Piece of Heart.

In Twilight Princess, Grottos appear in the various areas around Hyrule. Unlike previous games, this time around, they can only be accessed when Wolf Link digs in certain parts of the Overworld as they do not appear as holes Link can just fall into. The Grottos Link can access this way have a variety of different contents; either Link arrives in a cavern full of enemies, a cavern full of water that he can fish in, or even just a cavern that contains some minor enemies and a bunch of treasure chests. If Link chooses to take on the Poe Soul side quest, he has to explore some of these Grottos as a few of the Imp Poes Link needs to take out are positioned underground.