From Zelda Dungeon Wiki
Jump to navigation Jump to search
Want an adless experience? Log in or Create an account.
Cow 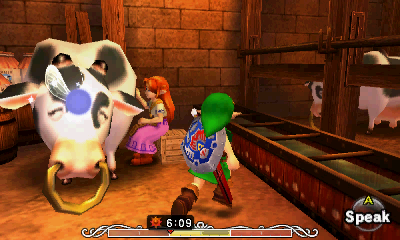 Cremia tending to a cow in Majora's Mask 3D

Cows are recurring animals in The Legend of Zelda series.

In Ocarina of Time, Lon Lon Milk can be obtained by playing Epona's Song in front of any cow. There are cows in the Lon Lon Ranch stable and in various Secret Grottos scattered around Hyrule.

By beating Malon's time on her Obstacle Course, Link will receive his very own cow, which will be in his house in Kokiri Forest in the adult time frame for the rest of the game.

In addition, in the Master Quest version only, there are cows trapped in the internal walls Inside Jabu-Jabu's Belly acting as switches. Where they are in the air, these will also give Lon Lon Milk from playing Epona's Song to them.

In Majora's Mask, cows can be found in the open during the day at Romani Ranch, but are moved to the barn at nightfall. The magic power in, and sought-after taste of, Chateau Romani is said to be a result of special Romani Ranch cows[1] bred by the father of Cremia, the current ranch owner, and her young sister Romani.[2] They will try to abduct the cows on the Night of the First Day — if Link does not help Romani to drive Them away until dawn, she will also be abducted, and returned traumatised and with her memory wiped.

As in Ocarina of Time, standard Milk can be obtained by playing Epona's Song in front of a cow. Cows are also present in two Secret Grottos, and Beneath the Well, where milk is required to enter another of the rooms.

Two questions in the Keaton Quiz relate to cows — the number of cows at Romani Ranch (three), and how many "tiny cow figurines" are scattered around Clock Town (ten).

Five cows live in Lon Lon Ranch. Four of them stay outside in the fenced area, while Elsie stays in the eastern side of the house.

Two types of cattle are present in Breath of the Wild — the domesticated Hateno Cow, and the wild Water Buffalo.