From Zelda Dungeon Wiki
Jump to navigation Jump to search
Want an adless experience? Log in or Create an account.
Rock Spire Isle 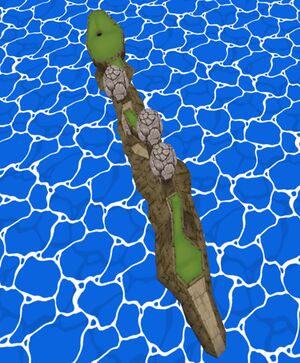 Rock Spire Isle is an island located in the Great Sea, one sector South of the Mother and Child Isles. It is described by its long narrow shape with three large Boulders on three "spires."

A Piece of Heart can be found just North-West of the center portion of the island with the aid of a Treasure Chart.

The layout of this Island consists of an traverseable incline at one end, four boulders arraigned in a row, three of which block the path to a cave and, a platform that has a cave on it. Since the lower portion of this island submerges with the tide along with the lack of space to land a bomb, it is not advised to throw bombs on this island at all therefore, use the Cannon function on the boat to destroy the boulders.

At the furthest end of the Island is a secret cave that leads to an underground chamber filled with many unlit Torches and Boko Sticks used light them. Once The Player has illuminated them, a few dozen Keese will appear and begin to fly around the cave. The Boomerang is highly suggested to use against them to minimize difficulty and injury afterwards, a Treasure Chest will appear containing a Treasure Chart.

Destroy the boulders and make your way across the spires. The Blue ChuChu is on the last spire.