From Zelda Dungeon Wiki
Jump to navigation Jump to search
Want an adless experience? Log in or Create an account.
Ghost Ship 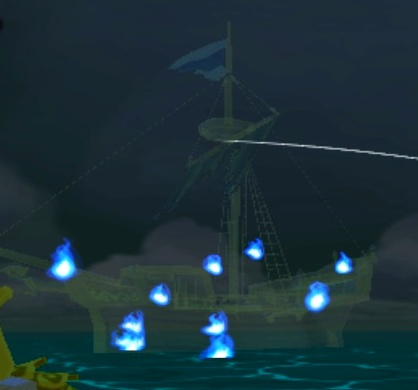 The Ghost Ship as seen in The Wind Waker

The Ghost Ship is a location that appears in The Wind Waker. It is a haunted ship said to be filled with treasure. Although it is difficult to find and enter, Link must track it down to find a Triforce Shard.

The Ghost Ship is a mysterious, intangible ship that sails around the Great Sea. It only appears at night on different islands with every phase of the moon. In order to board the Ghost Ship, Link is required to retrieve the Ghost Ship Chart from Diamond Steppe Island, an island in sector A6. The chart can also show which island Ghost Ship is currently haunting. If Link attempts to board the ship without the chart in hand, it merely disappears when he comes near it.[1]

The interior of the Ghost Ship is very similar to that of Tetra's Pirate Ship. However, its hull is destroyed in many places, allowing a small beam of light to enter, which Link can reflect using his Mirror Shield. In the HD version, the floor is also covered with a strange mist with ghostly faces in it. There are two rows of skulls along the sides of the room, and two Poes hovering near them. A Wizzrobe is also present, which will summon other enemies to fight Link until it is defeated. After all of the enemies on the ship are slain, a ladder drops down, allowing Link to access the back room of the ship. Inside is a treasure chest that contains either a Triforce Chart in the GameCube version or a Triforce Shard in the HD remake. After he opens the chest, an eerie laugh sounds through the ship, and Link wakes up on King of Red Lions the next morning. The Ghost Ship no longer appears on the Great Sea after this.

The Ghost Ship has quite the reputation around the Great Sea. The Fishmen often offer the hero warnings that it is a terrifying sight.[2][3][4] Lenzo, a photographer on Windfall Island, possesses a picture of the evasive Ghost Ship.[5] He informs Link that the man who followed the ship in order to write out the Ghost Ship Chart died mysteriously shortly after.[6]