From Zelda Dungeon Wiki
Jump to navigation Jump to search
Want an adless experience? Log in or Create an account.
Cyclops Reef 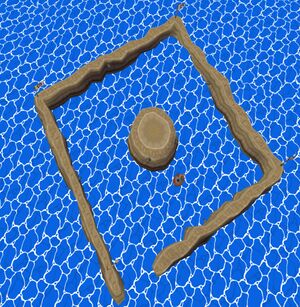 Cyclops Reef is an island located within The Wind Waker. It is the first of the Eye Reefs, and is located two squares west of the Tower of the Gods. Surrounding Cyclops Reef are Greatfish Isle to the west, Tingle Island to the north, Stone Watcher Island to the south, and Six-Eye Reef to the east. It has a square outer shape and one stone pillar in the middle, giving it the shape of a Cyclops or the 'one' side of a die. Not unlike the other Eye Reefs, it houses multiple bomb-firing turrets on the interior walls. If Link destroys all the turrets on this reef, a treasure chest will appear holding a Treasure Chart, specifically number 21, which leads to the Light Ring Chart.