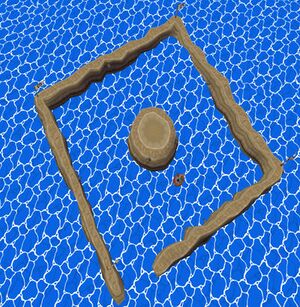 The Eye Reefs are six islands scattered through different parts of the Great Sea in The Wind Waker. No one lives in the reefs, but they each hold their own special treasure or two. Each reef has a certain amount of stone pillars in the middle, giving them each their specific name. The pillars are arranged inside the square shaped island to form the shape of the dots on a die, with the six different islands each a different face of the die. Each reef also has a set of cannons planted on the walls of the island, and Link must sail around on the King of Red Lions and destroy all of the with Bombs. After Link destroys all of the cannons, a Treasure Chest will appear onto one of the pillars in the middle of the island. No cannons or guard boats on these islands will appear until Link has defeated the Helmaroc King, so the island seems useless until then.

Cyclops Reef, the first of the Eye Reefs, is located two squares west of the Tower of the Gods. Link can acquire a Treasure Chart that leads to the special Light Ring Chart.

Two-Eye Reef, the second of the Eye Reefs, is located two squares east of Outset Island in quadrant G4. Link will find the Secret Cave Chart, acquire a Magic Meter upgrade, and also get one of the Triforce Shards.

Three-Eye Reef, the third of the Eye Reefs, is located three squares south of the Forsaken Fortress. Link will find Treasure Chart #32 as well as a Piece of Heart that he can pull up from the bottom of the ocean floor.

Four-Eye Reef, the fourth of the Eye Reefs, is located one square south of the Forsaken Fortress. It contains Treasure Chart #19 as well as the secret Great Fairy Chart.

Five-Eye Reef is the fifth of the Eye Reefs. It is located directly to the North of Outset Island and it contains Treasure Chart #41.

Six-Eye Reef is located two squares south of Windfall Island. Link will find the special Octo Chart as well as a Piece of Heart, located on the Submarine found within the region.