From Zelda Dungeon Wiki
Jump to navigation Jump to search
Want an adless experience? Log in or Create an account.
Fish

Fish are recurring creatures in The Legend of Zelda series. They start out as simple creatures that do not mean much, but have since expanded to become involved in Trading Sequences.

In A Link to the Past, a fish can be caught in the drained water in the south of the Light World after draining the Great Swamp with the switch in the Swamp Ruins. If Link throws the fish back in into deep water, it says, "Thank You", and then gives Link a Red Rupee. Furthermore, if Link goes to the Street Merchant and gives him the fish, he will give Link a variety of items.

A Link to the Past (GBA)

In A Link to the Past (GBA), fish are a target in Q. Bumpkin's Riddle Quest. To answer the fourth riddle, Link must capture a fish from the Great Swamp with the Bug-Catching Net, place it in Bumpkin's basket and take it to him.

Fish in Link's Awakening can be found in the Fishing Pond, a small fishing area located north of Mabe Village. There are no specific types, just small and large ones. Depending on the size of the Fish caught, Link receives rewards from the Fisherman whenever he catches one, including a Piece of Heart.

Additionally, there is a Fish-like enemy in Link's Awakening called Piranhas. They are really weak enemies, but can be a bit unpredictable. They can be found in flooded caves and in Goponga Swamp, swimming back and forth under the water.

In Ocarina of Time, Link can store fish in a Bottle.[1] If Link drops a fish in front of Lord Jabu-Jabu, it will inhale Link inside its belly. The Buyer will purchase a bottled fish from Link for 50 rupees. Link can also purchase Fish in the Zora Shop and Potion Shop for 200 Rupees.[2]

Collect Fish in Bottles and drop them into the tank containing two larger fish at the Marine Research Lab. Keep doing so until one fish grows enough to eat the other and spits out a Piece of Heart.

A fish can also be sold to the Curiosity Shop for 20 rupees.

Two fishing ponds - the Swamp Fishing Hole and Ocean Fishing Hole - were added to Majora's Mask 3D; each with twelve types of fish to catch, which have various prerequisites to obtain:

"You got a Fish as thanks for the ! It's market fresh!"

A Fish is the seventh item of the trading sequence in Oracle of Seasons. Because it is a market fresh Fish,[3][4] it is Ingo's dinner as well as Mittens' favorite food.[5][6] The Fish's sprite is blue, leading one to believe it might have been designed after the real world Bluefish.

The Fish is received from Ingo, a vase collector[7] who lives by his lonesome in a house in Sunken City. As a vase collector, Ingo greatly desires the Goron Vase, a vase that Biggoron has. However, no matter how many times Ingo asks Biggoron for the vase, he won't give it to Ingo, even in exchange for a Fish.[8] If Link has collected the Goron Vase and talks to Ingo, Ingo sees the vase and begs Link to give it to him.[9] After placing it nicely into his collection, Ingo rewards Link with the Fish.[5] 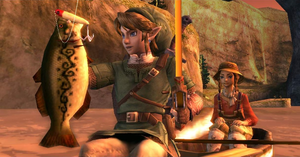 Fish in Twilight Princess are found in most ponds and rivers. They are only used in the game for Fishing, which Link can start as soon as he collects the Fishing Rod from Uli. Depending on whether the game is being played on the GameCube or Wii, the controls are fairly different.

Link only has to fish twice for the main quest, with all other fishing opportunities completely optional. The first required use is in Ordon Village, where Link has to use the Fishing Rod to catch two Greengills, which causes Sera's cat to grab the Fish and return it to Sera. The second time is in the quest to climb Snowpeak, as Link has to catch the rare Reekfish to gain the Reekfish Scent, which Link can use to climb the mountain.

After Link acquires the Fishing Rod, the Fish Journal appears in the Collection Screen. This journal records every Fish Link collects, including the largest type of each Fish caught. However, Fish caught in Hena's Fishing Hole do not count; only Fish caught in the overworld count for this journal.

Twilight Princess features one of the widest variety of Fish in any game in the series. They are six types in total, the same amount found in Phantom Hourglass.

The Greengill is a Fish found exclusively in Twilight Princess. It is a very common fish, being found in most bodies of water. They are very easy to catch, as they hardly fight back against the line. They are small in size and are colored green and yellow with a wavy stripe along its side. The largest known caught is 16 inches.

The Hyrule Bass, called the "definitive lake fish" by Hena, is a common fish. It has a green top and white bottom with a pattern on the middle. This fish is also found in Ocarina of Time. The largest known caught is 21 inches.

The Hylian Pike is also known in-game as the 'star of jumping fish'. It has a long body with a white zigzag pattern going down it. The recommended lures are the Spinner Lure and Frog Lure. It is very popular amongst the anglers because of its eyes. The largest known fish caught is 27 inches.

The Ordon Catfish is green with swirling patterns along its side, and is fairly common. It has what appears to be whiskers on its face, hence the "catfish" designation. It is unpopular with the anglers being called 'too slimy'; if one is caught in the presence of Hena, she tells Link to throw it back. The recommended lure is the Popper Lure. The largest known caught is 25 inches.

The Reekfish is a bright red fish which is only found near the Mother-and-Child Rocks in Zora's Domain. The Reekfish is used by Yeto to help cure Yeta's sickness. The fish has a very strong smell which helps Wolf Link to find the Yeti. The Reekfish can only be caught using the Coral Earring given to Link by Prince Ralis. The Reekfish is known to have a horrid stench, but is fairly nutritious.

The Hylian Loach is a large, rare fish that appears in Ocarina of Time and Twilight Princess. The Loach looks like a cross between the catfish and the pike.

The Skullfish is an illegal fish, so it is not recorded in Link's Fish Journal. They are found around Lakebed Temple and in secret caves located around Hyrule Field. They drop a heart when released. It looks like a fish that had been stripped of its flesh.

The Bombfish is a fish that looks like a fish with a bomb in its mouth. It is found inside Lakebed Temple and inside hidden caves around Hyrule Field. The Bombfish can be kept for an under-water bomb. It does not have an entry in the Fish Journal like the Skullfish.

The Skippyjack is a common fish easy to catch due to not zig-zaging or jumping too much. It is mostly found on the south-west section of the sea. After Link obtains the Big Catch Lure, the Skippyjack becomes more rare.

The Toona is also a common fish, but not as common as the Skippyjack. The Toona is still as common with the Big Catch Lure. The Old Wayfarer will not be impressed if Link shows him the fish.

The Loovar is a large and rare fish. It is rare with the normal lure, but if caught and taken back to the Old Wayfarer, he will reward Link with the Big Catch Lure. After that, the Loovar becomes much more common.

The Stowfish is a fish that can not be caught in the normal manner. Instead, Link will find it on another large fish with the Loovar being the minimum size. If Link takes a Stowfish back to the Old Wayfarer, he will be rewarded with a Ship Part.

The Neptoona is a very large fish taking up both screens of the DS. It can only be caught once Link shows the Old Wayfarer a Rusty Swordfish. The fish is a gargantuan, blue swordfish with a serrated bill with various green-blue markings. If Link shows the fish to the Old Wayfarer, he gives Link a Heart Container. The name is a pun on the Greek god Neptune and the fish Toona also found in the game.

The fish in Spirit Tracks are an object used for delivery. Link can buy 20 fish for 50 Rupees. The Fish can be taken to the Fish Saleswoman in Hyrule Castle Town for a Force Gem. It is not necessary to bring Mega Ice to the fish saleswoman in order to buy fish because all he needs is the cargo carriage. But, the Fish Saleswoman will not accept Mega Ice until the Fire Temple is completed.