From Zelda Dungeon Wiki
Jump to navigation Jump to search
Want an adless experience? Log in or Create an account.
Ingo's House 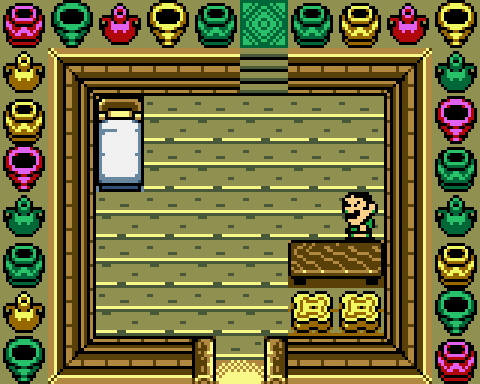 Ingo's House Interior
In Other Languages[show][hide]

Ingo's House[1] is a location in Oracle of Seasons. It is the home of Ingo, and is located inside Sunken City, a flooded city on the eastern border of Holodrum. Luckily for Ingo, the house is on a slightly raised platform, so even though the city is flooded, the house is not affected.

Inside, there is a row of vases that run all along the walls of the house. Ingo is a vase collector,[2] which explains the appearance of all the vases. There is also a bed in the top-left area, and a simple table with two chairs in the bottom-right, where Ingo is found standing.

This location plays a part in the Oracle of Seasons Trading Sequence. If Link visits Ingo at any point in the game, Ingo remarks how no matter how many times he asks Biggoron, he won't give Ingo his vase, even in exchange for Ingo's dinner, a Fish.[3] However, once Link gets the Goron Vase in exchange for the Lava Soup, he can bring the vase to Ingo, who immediately notices it and asks to have it.[4] Ingo places the vase in the only open spot on the row of vases, and thanks Link by giving him a Fish.[5] This Fish can be used to continue the trading sequence.

If Link walks towards the spot that Ingo put the Goron Vase, Ingo tells Link to scram, telling him not to touch his vases.[6]