From Zelda Dungeon Wiki
Jump to navigation Jump to search
Want an adless experience? Log in or Create an account.
Goron Vase 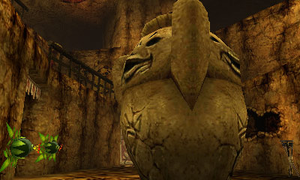 Goron Vase from Ocarina of Time
In Other Languages[show][hide]

The Goron Vase is a recurring item in The Legend of Zelda series. It has a different size, shape, and usage in every game it appears in.

In Ocarina of Time, the Goron Vase can be found at the base of the Goron City. Link must first light up all the torches in the city and then throw a Bomb inside the large vase. It starts to pop out various items based on which face points towards Link when the bomb explodes. Throwing a bomb in the happiest face causes it to eject a Piece of Heart. The happy face gives 3 groups of 10 bombs, and the angry face gives 3 Rupees.

The Goron Vases in Majora's Mask are much smaller than their Ocarina of Time counterpart. They can be found on top of the large chandelier inside the Goron Shrine, where there are five of them. If Link lights all of the torches in the room, the chandelier begins to spin. As Goron Link, Link has to roll up a ramp to hit a vase. Inside one of the vases is a Rock Sirloin. If Link hits this rock, the Rock Sirloin will pop out.

The Goron Vase is the sixth item in the trading sequence of Oracle of Seasons. It is a fine vase that was made by a Goron.[1][2] It is highly coveted, by both collectors and others, including Gorons.[3][4]

The Goron Vase can be obtained from Biggoron, who can be found on the summit of the Goron Mountain. If Link travels to where Biggoron is, Biggoron reveals to Link that he is sick, and ask Link for something to warm him up.[5] If Link comes with the Lava Soup, Biggoron sniffs it out, and asks to have the soup.[6] After gulping it down, Biggoron is relieved of his cold.[7] Biggoron then gives Link the Goron Vase as a symbol of his gratitude.[7]

The Goron Vase can then be used to obtain the seventh item in the sequence, the Fish. The Fish is obtained from Ingo, a vase collector[8] who lives in a small house in the northwest section of Sunken City. Once Link has entered the house, Ingo tells Link that no matter how many times he asks Biggoron for the Goron Vase, he still refuses to give Ingo the vase.[9] Ingo wants the vase so bad, that he'd be willing to give up his dinner, a Fish, for it.[9] If Link encounters Ingo with the Goron Vase in hand, Ingo spots it out, and begs Link to give it to him.[10] After placing it nicely in his collection, Ingo thanks Link by giving him the Fish.[11]