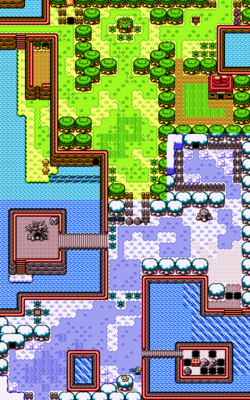 North Horon is a location featured in Oracle of Seasons. Located just north of Horon Village, it is the very first area featured within the game. Link will encounter Din, the Oracle of Seasons, and soon after she is taken captive by General Onox. North Horon is also the location where Link first encounters Princess Zelda in a Linked Game when she makes her way to Holodrum. Link saves Zelda from the Great Moblin and his minions.

North Horon, as its name suggests, is located directly north of Horon Village. To the west of North Horon, Link finds the Holodrum Plain. Link can move between the Holodrum Plain and North Horon by land or water. To the east of North Horon, Link finds the Eyeglass Lake, but much of this region isn't accessible until later in the quest. The area to the north and northeast vary, depending on which Animal Companion Link has acquired. It is the region of Natzu, but the location differs between the Natzu Prairie with Ricky, Natzu River with Dimitri, or the Natzu Wasteland with Moosh.

Link then appears at the southern tip of North Horon where he is awoken by Impa. Impa instructs Link to head south into Horon Village and meet with the Maku Tree.[1]

North Horon is located right in the center part of Holodrum and thus, it is an area that Link passes through quite often through his quest. North Horon is divided into two major sections, a north region and a south region. Separating the two areas is a pair of rocks that can only be lifted using the Power Bracelet which is found within the second dungeon, Snake's Remains.

During the season of Winter, Link can access the Eyeglass Lake at the southeast part of the area by crossing over the frozen ice. During Spring and Fall, Link can only reach this area by using the Flippers. During Summer, the water south of the Tree Stump has dried up, revealing a very shallow lake that Link can walk on. A small cave can be reached that contains a Treasure Chest holding 100 Rupees.

The southern region plays a major role in the Trading Sequence found throughout the game. After Link acquires the Cuccodex from Dr. Left within the Biologist's Home of Horon Village, he can take it to Talon & Malon's House, located at the northeast corner of North Horon. Malon says she's busy taking care of her family's hens, but that there is so much she doesn't know.[2] If Malon sees the Cuccodex, she asks to have it.[3] As thanks she offers Link the Lon Lon Egg, saying that they are all the rage with cute girls.[4] This item is later used to acquire the Ghastly Doll.

Later in the Trading Sequence, Link acquires the Fish from Ingo.[5] Link can take this Fish to the Owner of Mittens, who can be found beside a tree at the south end of the region. Mittens, his pet cat, is stuck in a tree, and no matter how much he calls for her, she won't come down.[6] However, if Mittens' Owner sees the Fish, he asks if Link brought it for her.[7] If Link says yes, he uses the Fish to get Mittens to come down. As thanks, Mittens' Owner gives Link the Megaphone.[8] Link can then use this Megaphone to acquire the Mushroom on Mt. Cucco.

There is a bridge just east of the Owner of Mittens and it leads to a small island within the Eyeglass Lake. Though it is technically outside of the North Horon region, it can only be accessed this way. The island has a Treasure Chest that holds a Gasha Seed.

On the same screen with the Soft Soil location, there is a secret within the water. If Link changes the season to Summer, the water will dry up, revealing a hidden staircase. Inside, Link finds an Old Man who tells Link to slay the four Golden Beasts. After defeating the four Golden Beasts, Link can return to this Old Man location and he gets a Seed Ring which, when appraised, becomes the rare Red Ring.

One screen west of the Tree Stump, there are two bushes. The bush on the left can be burned using an Ember Seed and it leads to a good Old Man cave. Inside the Old Man offers Link 100 Rupees.

The Gnarled Root Dungeon is the first dungeon featured within Oracle of Seasons and it is the main attraction found within North Horon. The dungeon is initially hidden and Link needs to acquire the Gnarled Key from the Maku Tree to reveal its entrance. Inside the dungeon, Link acquires the Seed Satchel and the Ember Seeds. Link battles with the mini-boss in the form of the Brother Goriyas and the dungeon boss Aquamentus. As a reward for completing the dungeon, Link receives a full Heart Container as well as the first Essence of Nature, the Fertile Soil.

At the far southwest corner of the region, Link can find Impa's Refuge. This small home is where Impa stays for the main portion of Link's quest. In a Linked Game, this is also where Princess Zelda remains for a bulk of the adventure.

Link can still change the season within this northern region. However, he has to use the Tree Stump found to the west in the Holodrum Plain. The default season in that area is also Spring and it does not change as Link travels between the areas.

At the nsorth end of the area, Link finds a Mystical Tree that holds Pegasus Seeds. This is the first location where Link can find Pegasus eeds and in the main quest, he requires them soon after when journeying into the Spool Swamp. Acquiring the Pegasus Seeds also makes it possible to warp to this Mystical Tree using a Gale Seed.

At the west end of the region there is a higher ledge that grows vines during the Summer. This allows Link to reach a pair of trees, the right one which could be burned to reveal an Old Man. Inside the man offers Link 200 Rupees.

Just south of this higher ledge, there is a cave near the water. If Link changes the season to Autumn, he can swim to this cave's entrance. Inside, there is a Treasure Chest containing a Seed Ring, that when appraised, becomes the Quicksand Ring.

Near the northeast corner of the region, Link can find Blaino's Gym. It is here that Link encounters Blaino and has a boxing match with him. Link needs to defeat Blaino in order to acquire Ricky's Gloves, which are needed in order to gain use of Ricky at the Holodrum Plain.

The Great Moblin in North Horon

During a Linked Game, there is an additional scene that takes place in North Horon just after Link completes the second dungeon, Snake's Remains. When Link enters the area, he is informed by Impa that Princess Zelda has left Hyrule Castle and is on her way to Holodrum without a guard.[9] Link soon finds Princess Zelda in the north part of North Horon where she is about to be ambushed by the Great Moblin and his minions. After Link fights off the Moblins, Zelda thanks Link and rewards him with a Magical Ring. When appraised, this becomes the Blue Joy Ring. The Princess then heads off to the Impa's refuge at the south end of North Horon.