From Zelda Dungeon Wiki
Jump to navigation Jump to search
Want an adless experience? Log in or Create an account.
Eyeglass Lake 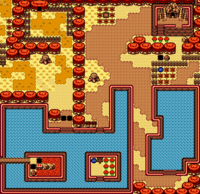 The Eyeglass Lake is a location found within Holodrum in Oracle of Seasons. The fifth dungeon of the game, the Unicorn's Cave, is found here. The most eminent of this place is the two small islands which the Eyeglass Lake is named after. The first island is connected by a bridge, and the second island isn't connected to anything. Link can find a treasure chest containing a Gasha Seed on the first island. Additionally, two portals to Subrosia can be found here, one on the second island and one south of the Unicorn's Cave.