From Zelda Dungeon Wiki
Jump to navigation Jump to search
Want an adless experience? Log in or Create an account.
Subrosia 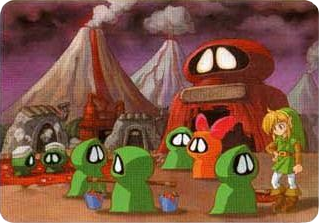 Before Onox sunk the Temple of Seasons, the Subrosians' lives were peaceful. Once the temple sank into Subrosia, many problems were starting. These include the destruction of an area referred to as the 'East Plaza', a drop in the lava level, endangering the Subrosians' food source, and the instability of the land's volcanoes.

Subrosia uses Ore Chunks as its main currency, unlike Holodrum and Hyrule that use Rupees as its main currency. This is due to the abundance amount of Ore Chunks found in Subrosia. However, some residents of Subrosia also use a bartering system as do the Tokay in Oracle of Ages. The Subrosia Market accepts, in addition to ore chunks, Mystical Seeds and Bombs as payment for items.

Due to Subrosia being a subterranean world, it is very hot and volcanic, containing rivers and oceans of lava and many active volcanoes that are around the less populated areas and are known to spew out lava and hot rocks that can cause damage to Link. Despite this, plant life is able to grow around certain areas. Due to the Subrosians having an immunity to the intense heat in Subrosia, they take relax in the lava. Also, the Subrosians built the Subrosian Dance Hall due to their tradition of dancing. Like Holodrum, there is a mountain range to the north as well as a coastline to the south. Also, there are caves scattered around the land. There are populated areas, known as Subrosia Village, in Subrosia where the Subrosian Smithy, houses, the Subrosian Market, and the Great Furnace are located in. Eight regions make up all of Subrosia, Subrosia Village being the largest region while Subrosia Cemetery is the smallest region. Subrosian Volcanoes dominates the northern land of Subrosia.

The main inhabitants of Subrosia are the native inhabitants called Subrosians. Piratians also inhabit Subrosia in the House of Pirates after their ship crash-lands in the Samasa Desert. Once Link gives back the Pirate's Bell, the Piratians will leave Subrosia.

Many items can be found throughout Subrosia. Some are the usual items that can be found in Holodrum as well ― such as Recovery Hearts ― but others are only found in Subrosia. By completing the Subrosian Dance, Link acquires the Boomerang, ore chunks or even Gasha Seeds. The Hyper Slingshot is found in the Sword & Shield Maze. Ore Chunks can be found by chopping down grass or digging with your Shovel and is the currency used in Subrosia; rupees are useless there. The Star-Shaped Ore is an item that is dug up using your shovel. You can buy the Ribbon so Rosa will go on a date with you. Magical Rings can be bought at the Subrosian Shop, as can Gasha Seeds and the Member's Card for the Horon Village Shop. In order to gain entrance to the Tower of Autumn and gain access to the furnaces, Link must locate the Bomb Flower and blow away the rocks blocking the Tower of Autumn. Red Ore and Blue Ore can be found in two locations in Subrosia. When smelted together, they create Hard Ore. When taken to the Subrosian Smithy, the hard ore can turn your Wooden Shield into the Iron Shield.