From Zelda Dungeon Wiki
Jump to navigation Jump to search
Want an adless experience? Log in or Create an account.
Samasa Desert 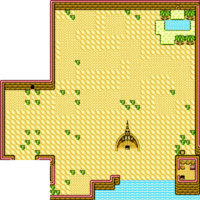 Samasa Desert is a location in Oracle of Seasons. It is found east from the Eastern Suburbs, and north from the Eastern Coast. It is accessible once Link has entered the password given to him by the Piratian inside of the House of Pirates.

This desert is filled with quicksand pits that may or may not lead to an underground area. Some of the pits will send Link to an underground room where a Business Scrub will offer Link a shield for 150 Rupees. The sandpit at the southern part of the desert will take Link to an underwater room, this will lead Link onto the high part of Samasa Desert. On this high area is a Treasure Chest, which will contain the Rang Ring L-1. During the quest for the Pirate's Bell, if Link falls down any pit while the Piratian's head is being held and while it's yelling, he will be lead to a room where the rusty Pirate's Bell is.

There are two caves that can be found in Samasa Desert. One of them leads to a room that contains four Like Likes. The next cave contains a Fairy Fountain.

The stern of the Pirate Ship can be found in the center of the desert.