From Zelda Dungeon Wiki
Jump to navigation Jump to search
Want an adless experience? Log in or Create an account.
Eastern Suburbs 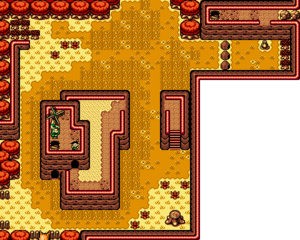 When Link first reaches the Eastern Suburbs, he will soon run into Rosa north portion of the area. Rosa is a Subrosian and after following her, Link will find a secret entrance to Subrosia. This quest leads Link through the Woods of Winter along his journey to the second dungeon, Snake's Remains.

The Windmill is located at the west end of the area and Guru-Guru can be seen next to it. While the rest of Eastern Suburbs shares the same Overworld tune as other areas in the game, the screen with the Windmill, as well as the inner portions of the Windmill has its own theme. This theme is a rendition of the Song of Storms, which first appeared in Ocarina of Time.

After going through the Windmill, Link can speak with Guru-Guru. Speaking to him earlier in the game, Link finds out that he enjoys spinning the Phonograph and states that if he oiled it up, it would go around more quickly.[1] He plays a role in the Trading Sequence, where Link will give him the Engine Grease in exchange for the Phonograph.

At the southeast corner of the Eastern Suburbs, Link will find the lone Tree Stump in the area. Though the natural season of the Eastern Suburbs is Autumn, there are a few secrets Link can uncover by changing the seasons. If he uses the Rod of Seasons to change the season to Winter, snow fill the area. One screen north of the tree stump, the pile of snow has created a ramp, allowing Link to reach a cave at the east end of the Windmill. This will lead to Link acquiring a Piece of Heart.

Later in the quest, Link can use the tree stump to change the season to Spring. At the northeast corner of the Eastern Suburbs, Link will find a Blast Bloom that leads to a cave. Inside there is a Treasure Chest that contains a Gasha Seed. However, it can only be reached by using the Magnetic Gloves.

Only a few enemies populate the Eastern Suburbs. Link will encounter both Red and Blue variants of Octoroks. Similarly, Red and Blue Pig Moblins can be found in the region, as well as sworded Blue Pig Moblins. At the northwest corner of the area, Link will find a pair of Peahats. These enemies can only be defeated when they land on the ground and stop moving momentarily.