From Zelda Dungeon Wiki
Jump to navigation Jump to search
Want an adless experience? Log in or Create an account.
Woods of Winter 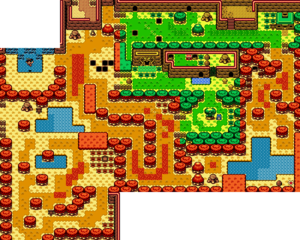 Natural Seasons of the Woods of Winter.

Despite its name the default seasons of the Woods of Winter are Summer and Autumn. This is likely thanks to Onox, who has thrown the seasons of Holodrum into chaos. After Link acquires the Rod of Seasons, he will be able to make the season change to Winter, which due to ice freezing over, and the branches of trees falling, gives Link access to much of the Woods.

After Link acquires the Seed Satchel and the Ember Seeds from the Gnarled Root Dungeon, he can burn a small bush at the east end of Horon Village, giving him access to the Eastern Suburbs. In the northern area of the Eastern Suburbs, Link will meet with Rosa the Subrosian for the first time. Though Link can see Rosa, she doesn't actually communicate with Link. Instead, Rosa is secretly traveling through the Woods of Winter, looking around to assure nobody is following her.

Link must travel through these initial screens, following Rosa without allowing her to spot Link. Once Rosa reaches the screen with the Tree Stump, she will sneak left a screen to the Eyeglass Lake. It is here that Rosa will use a Subrosian Portal to access the land of Subrosia. Link can follow right behind and enter Subrosia. Here he will travel to the Temple of Seasons where he will acquire the Rod of Seasons.

When Link returns to the Woods of Winter, he will meet with Sokra, the wandering prophet. Sokra explains how Link can change the season using the Rod of Seasons and the nearby Tree Stump. However, he notes that the Rod only has the Power of Winter.[1] After Link has the ability to change the season to Winter, he can access much of the Woods.

At the southwest most region of the Woods of Winter, Link will find a sign that warns Link of Like Likes to the right.[2] This screen has four Like Likes, Link's first encounter with them in Oracle of Seasons. This enemies have the ability to steal Link's Wooden Shield.

Just north of the Like Likes, Link will find a series of small bushes. If Link cuts through these bushes, a Soft Soil location can be found hidden beneath them. Link can plant a Gasha Seed here and it will eventually flourish into a Gasha Tree that gives a Gasha Nut.

Just north of the initial Tree Stump, Link will find a Great Fairy location. Link can come to this Great Fairy pond at any point in time to restore his health completely.

There are a series of small caves within the Woods of Winter, two of which are found along the northern portion of the Woods. The cave on the left will first need to be blown up, using a Bomb. Inside, Link will find a Treasure Chest that contains 30 Rupees. This cave is accessible in Spring, Summer, and Autumn, but its entrance is covered with snow during Winter.

There is also a cave right next to a Tree Stump at the northern portion of the Woods. Early on in the quest, Link is unable to navigate this cave as the deep water cannot be crossed. This cave is actually an outflow from the Sunken City to the north.[3]

Just south of Holly's House, Link will find four small bushes that he can burn with Ember Seeds. The one to the north reveals an Old Man location. If Link speaks to the Old Man, he will have to pay him 50 Rupees for the Door Repair.

Near the center part of the Woods of Winter, Link fill find a Mystical Tree. This is a Mystery Tree and the first location where Link can acquire Mystery Seeds. He can immediately use these Mystery Seeds on the Owl Statue that is nearby. The owl tells Link never to forget to give him Mystery Seeds.[4] Throughout Link's journey, these owl statues will give Link tips and hints.

Just east of the entrance to Snake's Remains, Link fill find a pair of caves. The cave on the left is initially inaccessible as the water in front of it prevents Link from entering. Link can later use the Tree Stump on this screen to change the season to Winter, causing the water to freeze over, and allowing Link to enter the cave. Inside, Link will find a series of bushes with a recovery Fairy underneath one of them. 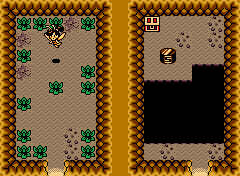 Inside the cave during a Linked Game.

In a Linked Game, Link will find a Great Fairy within this cave. The Great Fairy will tell Link a Secret to take back to Lynna Village in Oracle of Ages. The secret is meant for Tingle, the man who thinks he is a Fairy. The Tingle Secret will eventually lead to Link upgrading the capacity of his Seed Satchel to 30, 50, or 99 Seeds, depending on whether previous upgrades had been acquired.

Just to the east of this caves entrance, there is another entrance to this same cave. However, this is blocked off by Rock Mushrooms that can only be lifted during Autumn. After the Rod of Seasons has been upgraded with the power of Autumn, use it on the Tree Stump to change the season and gain entrance to this cave. Inside, Link can use the Magnetic Gloves to reach the Treasure Chest. Inside he will find a Seed Ring that when appraised becomes the Moblin Ring.

During Link's quest through Snake's Remains, he will head outside for a period of time, navigating between two staircases. In between, he will find a Treasure Chest that contains a Gasha Seed.

After Link has acquired the Power Bracelet from Snake's Remains, he can collect the Piece of Heart located at the southeast corner of the Woods. The heart piece is located just across a small pond and a rock will block the pathway to the heart. Alternatively, Link can wait until he has acquired the Zora's Flippers, where he can then just swim across the pond.

During Link's quest, he can meet an Old Man located one screen south of Gnarled Root Dungeon. He is found during the Summer when the water has receded, revealing a staircase. As soon as Link speaks with the Old Man, this triggers the side quest to acquiring the Red Ring. Four Golden Beasts will appear throughout the Overworld. One of these beasts is the Golden Moblin and it will appear just outside the entrance to Snake's Remains.

The Golden Moblin is a significantly stronger version of a standard Moblin. Since it is only encountered during Autumn, and the default season of this part of the woods is Summer, Link will have to wait until he has the power of Autumn in his Rod of Seasons before he can encounter the Golden Moblin.

Holly's House is a location found at the northeast corner of the Woods of Winter. The front entrance is locked and Link will need to enter through the chimney. Inside, Link will find Holly, who will give Link the Shovel, allowing him to dig through the snow.

The Snake's Remains is the second dungeon featured within Oracle of Seasons and it is the main attraction found within the Woods of Winter. The dungeon is located right in the middle of the Woods, but Link will first need to navigate almost the entirety of the woods to reach it. Inside the dungeon, Link will acquire the Power Bracelet, which gives him the ability to lift up certain objects and enemies. Link will battle with the mini-boss in the form of the Facade and the dungeon boss Dodongo. As a reward, Link will get a full Heart Container as well as the second Essence of Nature, the Gift of Time.

As a location fairly early in Link's quest, most of the enemies encountered are fairly basic. Link will fight Leevers, Like Likes, Peahats, and Moblins.