From Zelda Dungeon Wiki
Jump to navigation Jump to search
Want an adless experience? Log in or Create an account.
Facade 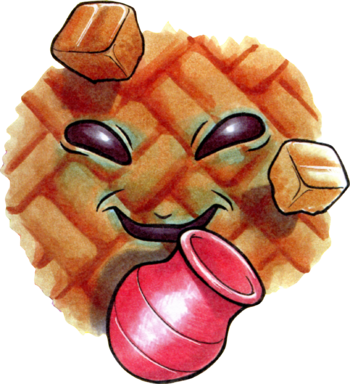 Facade is a boss in Link's Awakening, and a mini-boss in Oracle of Seasons. Unlike most bosses, Facade attacks by using his environment instead of attacking directly, though he does spit flames out of his mouth.

In Link's Awakening Facade serves as the boss in the aptly-named Face Shrine. In the battle he is unable to attack Link directly instead having to rely on creating holes, or by using flying pots and flying tiles. The pots and the tiles can be dealt with with Link's sword, while running around the stage can prevent him from falling down holes. Facade can be easily defeated by blowing up five Bombs in his face.

After he is defeated, Link is rewarded with a Heart Container and the Coral Triangle.

In Oracle of Seasons Facade behaves largely the same as he did in Link's Awakening, only this time he is only a mini-boss in the Snake's Remains dungeon and Onox's Castle. In this game he also gains the ability of dropping Beetles from the ceiling and also is able to spit flames from his mouth. Link can easily defeat him with a couple of bombs. After defeated he drops a Fairy and a portal back to the entrance in Snake's Remains.