From Zelda Dungeon Wiki
Jump to navigation Jump to search
Want an adless experience? Log in or Create an account.
Moldorm 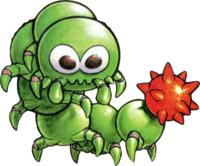 Moldorm is a Nightmare from Link's Awakening and is the boss of the first dungeon, Tail Cave.

When Link first enters the room, Moldorm speaks, calling him an outsider before attacking.[1] The battle starts immediately after with Moldorm quickly moving around the room in random patterns. Moldorm's only weak point is its tail. In order to defeat it, Link must hit its tail four times with his sword. However, if he falls down any of the pits on either side of the room, he will have to climb back up and start the battle over again. After it is hit three times, Moldorm moves much faster than usual, making it even more difficult to hit.

A Shield will stop Link from taking damage if Moldorm runs into him, but it will also push Link back. If Link is against a wall, a hit from Moldorm will make him slide toward one of the pits. The Shield is a great way to avoid damage, but sometimes it's better to take the hit rather than having to start the entire fight again. Once it is defeated, a Heart Container appears in the Nightmare's place and the door at the north of the room opens. Inside of the room is the Full Moon Cello, the first Instrument of the Sirens.