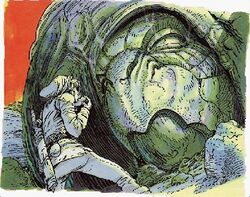 Turtle Rock is a mini-boss in Link's Awakening. It guards the entrance to the dungeon of the same name. It is found in the Tal Tal Mountain Range, in the northwest of Koholint Island. It is a large head of a stone turtle that comes to life when Link plays the Frog's Song of Soul on his ocarina.

It is a rather simple boss. When it first awakens, it extends its head out of the mountain and moves from side to side. On occasion, it lunges out with its head toward Link. In order to defeat it, Link needs to hit it with his sword a few times. After it is defeated, it disappears and the entrance to the Turtle Rock dungeon appears in its place.