From Zelda Dungeon Wiki
Jump to navigation Jump to search
Want an adless experience? Log in or Create an account.
Snake's Remains

The Snake's Remains is the second dungeon in Oracle of Seasons. It is located within the Woods of Winter at the east portion of Holodrum.

After Link acquires the Ember Seeds from the Gnarled Root Dungeon, he can access the Eastern Suburbs and thus, the Woods of Winter. Here he will meet up with Rosa who will lead Link to the land of Subrosia. After acquiring the Rod of Seasons from the Temple of Seasons, Link will be able to traverse across much of the Woods of Winter to reach Snake's Remains.

The actual dungeon is located in the center portion of the Woods, but Link will need to traverse almost the entire region to get here. This includes acquire the Shovel from Holly at Holly's House, so that Link can dig through the snow leading to the dungeon. 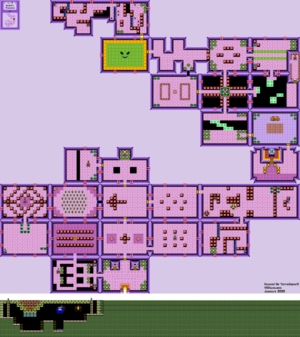 There is one unmarked room on the Dungeon Map, located two screens up and one screen left of the dungeon entrance. While it isn't indicated on the map, there is a formation of blocks that create an arrow, hinting at the secret. After blasting a hole with a Bomb, Link will find room filled with Rupees.

The dungeon is filled with block-oriented puzzles. Often this is as simple as just pushing a single block, based on the formation of the blocks in the room.

One of the unique features of Snake's Remains is that midway through the dungeon, Link will actually exit the dungeon, taking him back outside to the Woods of Winter on the nearby higher ledge. In this outdoor region, Link has access to a Treasure Chest containing a Gasha Seed. Additionally, there is a Tree Stump here that can be used to change the season. Link can change the season to Winter, allowing him to access the cave on this screen which has a recovery Fairy.

There is a unique bomb-timing puzzle after Link passes through the outdoor portion of the dungeon. Link will have to bomb a series of cracked blocks in a timely manner. After he has successfully done so, he will reach a treasure chest containing a Small Key. If Link runs out of bombs, luckily there is a Business Scrub in the previous room that will sell Bombs to him. All in all, there are three small keys for Link to collect in this dungeon, and the only other treasure chests contain the usual dungeon items, such as the Dungeon Map, Compass, and the Boss Key. There is one optional treasure chest that contains some extra rupees.

In one of the last rooms of the dungeon, Link will find a Turntable. Each time Link steps into the turntable, it will rotate 90 degrees in whichever direction it is pointing. However, each time Link uses the turntable, the direction the arrow will point will change. This particular turntable in Snake's Remains isn't too difficult, but there are significantly more complicated turntable puzzles in both Oracle of Seasons and Oracle of Ages.

Facade is a recycled boss from Link's Awakening. Link will need to avoid the fireballs that fall from the ceiling, as well as the holes that Facade summons in the ground. In order to defeat this boss, Link will need to toss five bombs near Facade.

Dodongo is a giant dinosaur-like monster that slowly walks around the room. Unlike most bosses, Link does not need to use his sword at all in this battle. Instead, Link must plant a Bomb in front of Dodongo so that he gobbles it up. After it explodes, Link can lift Dodongo and toss him onto the spikes in the center of the room. After defeating the boss, Link will get a Heart Container, as well as the second Essence of Nature, the Gift of Time.