Poison Moth's Lair is the third dungeon featured in Oracle of Seasons. The dungeon is located at the northwest corner of Spool Swamp. Inside, Link acquires the Roc's Feather, giving him the ability to jump. Link later battles the dungeon boss, Mothula, on his way to acquiring the third Essence of Nature, the Bright Sun.

After acquiring the Power Bracelet, Link is able to journey to the north portion of North Horon. After battling Blaino at Blaino's Gym, Link acquires Ricky's Gloves, which he can then give to Ricky. Using Ricky, Link can travel through the Holodrum Plain on his way to Spool Swamp.[1]

When Link first arrives at the Spool Swamp, he can immediately make his way to the northwest corner of the area where he will find the entrance to Poison Moth's Lair. The dungeon entrance is marked by a carving of a moth into the rock wall. Before Link can enter the dungeon, he will need to traverse to the southern portion of Spool Swamp. Link begins this journey by acquiring the Floodgate Key from the Floodgate Keeper's House. Using this key, Link opens up the Floodgates, giving him access to the southern portion of Spool Swamp.

Link will need help from whichever Animal Companion he has to journey through Spool Swamp, whether it be Ricky, Dimitri, or Moosh. Link will find a Subrosian Portal where he can journey to Subrosia. After going on a date with the Subrosian Rosa, Link makes his way to the Temple of Seasons where he powers up his Rod of Seasons with the power of Summer.

One screen south of the entrance to Poison Moth's Lair, there is a Tree Stump that Link can use to change the season to Summer. Doing so will cause Vines to appear at the dungeons entrance, allowing Link to climb up and enter the dungeon. 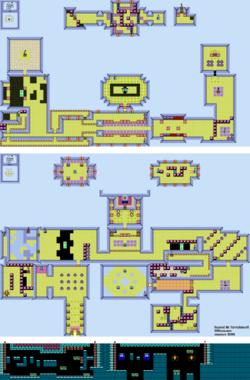 Map of the Poison Moth's Lair.

Poison Moth's Lair is the third dungeon ventured through in Oracle of Seasons and is a bit lengthier and more complicated than either the Gnarled Root Dungeon or Snake's Remains that preceded it. The dungeon spans across three floors in which Link will return to the same rooms on several different occasions.

There are several new enemies that appear within Poison Moth's Lair. The first of which is a Spiked Beetle, which Link will need to use his Shield to flip over, revealing its soft belly.[2] Link will also encounter Arm-Mimics, which as their name suggests, will mimic all of Link's movements. These exact enemies were deadly in Link's Awakening, doing three full hearts of damage. However, they have been toned down considerable in Oracle of Seasons and aren't much of a threat.

The puzzles found in Poison Moth's Lair are also a bit more complicated, building off of previous dungeons. While earlier dungeons had simple block or pot pushing puzzles, there are a pair of more intense puzzles of this nature in the dungeon. One such puzzle involves Link pushing a jar across a room onto a floor switch, causing a nearby door to open. Another, involves Link pushing a series of colored block statues to match an identical pattern in the room. In an early room, Link will have to push a series of rollers using the Power Bracelet, similar to what he needed to do in Snake's Remains.

After Link acquires the dungeon item, the Roc's Feather, the item is put to use with some puzzles. Simple traversal is requiring using Roc's Feather by jumping across platforms or to moving platforms. Later in the dungeon, Link will encounter trampolines, which Link can use Roc's Feather on them to leap up to the floor above.[3] In some rooms, Link will need to first push the trampoline to an area with a whole in the ceiling before jumping up to the higher floor.

In addition to the usual Dungeon Map, Compass, and Boss Key, Link will find two Small Keys within the dungeon. There are also three optional Treasure Chests within the dungeon, one containing some Bombs, one with some Rupees, and another with a Gasha Seed.

Omuai is a trio of jelly-fish that live in the water. These creatures will pop up from underwater and shoot a fireball out towards Link. They prefer to be in the water where they are invincible, so Link will need to take them out of their comfort zone.[4] Link can lift them up with the Power Bracelet and toss them aside. While they are out of the water, Link can strike them with his sword to defeat them.

Mothula is a fast-flying Moth that serves as the dungeon boss. Mothula will spawn smaller moths and send them out towards Link. These small creatures are easily defeated with simple sword slashes. Mothula will also fly around the room at a fast pace, shooting fireballs towards Link. When Mothula sits still, it will creature a circle of fireballs around itself.

If Link falls down during the battle, he will have to use the trampoline to jump back up to the boss room, restarting the battle in the process. After enough sword slashes, Mothula will be defeated. After defeating the boss, Link will get a Heart Container, as well as the third Essence of Nature, the Bright Sun.