From Zelda Dungeon Wiki
Jump to navigation Jump to search
Want an adless experience? Log in or Create an account.
Linked Game Secret 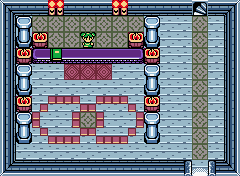 The Hall of Secrets

A Linked Game Secret is a Secret that is told between characters in Oracle of Seasons and Oracle of Ages. This often leads to Link acquiring upgrades to his Sword, Shield, or other inventory items. Sometimes it leads to Link upgrading the capacity that he can carry for certain goods, such as Bombs or his Seed Satchel.