From Zelda Dungeon Wiki
Jump to navigation Jump to search
Want an adless experience? Log in or Create an account.
Ruul Secret 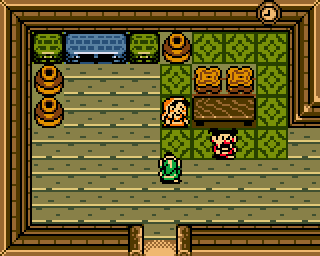 After completing the Wing Dungeon, Link can return to the present and will find Mayor Plen's Grandmother within Mayor Plen's House, at the center of town, one screen north of the mermaid fountain. Speak with her and she will recognize Link as the hero who saved Holodrum. She mentions that fate has brought the two together and asks if Link will hear out her request.[1] She asks if Link remembers Mayor Ruul, the mayor of Horon Village. She will ask Link to tell him a secret.[2]

In Oracle of Seasons, Link can visit Mayor Ruul and tell him the secret.[3] Mayor Ruul can be found at his house, located at the northeast portion of Horon Village. The Mayor recognizes the secret from a friend and will reward Link with a larger Ring Box.[4]

After earning the reward from Mayor Ruul, he'll also teach Link a secret that he can take back to Labrynna.[5] Return to Farore within Labrynna's Maku Tree and tell her the secret. This will upgrade Link's Ring Box in Oracle of Ages.