From Zelda Dungeon Wiki
Jump to navigation Jump to search
Want an adless experience? Log in or Create an account.
Diver Secret 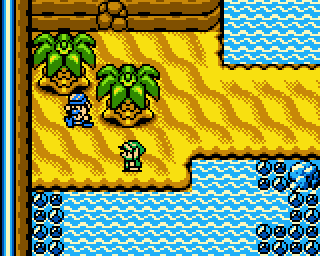 After reaching Zora Village, make your way to the Gale Tree in the present. From there, swim north two screens and west a screen to find the Master Diver's Pupil on the island. Talk to him and he will recognize Link as also being one of the Master Diver's pupils. He will tell Link a secret and asks him to relay the message to the Master Diver in Sunken City within Oracle of Seasons.[1][2]

Back in Oracle of Seasons, warp over to the Sunken City. The Master Diver is now back in his house, which is located at the west end of the Sunken City, near the entrance from the Natzu region. Inside the house, speak with the Master Diver and he will ask Link if he needs anything.[3] Tell him the secret and he remembers his Pupil from Labrynna. He offers to give Link a gift, but only if he can first pass his test.[4]

The Master Diver will give Link a quest. He will need to walk down the staircase that appears.[5][6] Link will need to swim through the underwater maze and reach the star at the end within 30 seconds. If Link takes too long, the Master Diver offers him another opportunity to try again.[7] It is actually quite a tight time limit, so you'll need to get the pattern down and swim as quickly as possible. You only ever want to slash your sword if it is absolutely necessary. Otherwise, just avoid the enemies.[8]

For completing the race in 30 seconds or less, the Master Diver will give Link a Magical Ring.[9] The Master Diver encourages Link to take it to Vasu Jewelers in Horon Village. When appraised, it will become the Swimmer's Ring. When worn, this will increase Link's speed while swimming.