From Zelda Dungeon Wiki
Jump to navigation Jump to search
Want an adless experience? Log in or Create an account.
Old Man 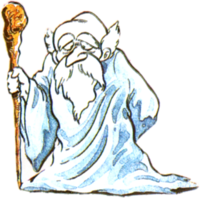 The Old Man is a recurring character in The Legend of Zelda series. In each game he appears in, he offers assistance to Link, by way of giving him items, upgrades, Rupees, and hints.

The Old Man in The Legend of Zelda can be called Link's companion throughout his adventure. He appears almost everywhere; in Overworld Caves and in at least one room of every Dungeon in the First Quest. He is first met in the cave on the Starting Screen of the game and gives Link his first Sword at this location. He also gives Link many other items all the way, including the White Sword, the Magical Sword, and both Bomb upgrades. Also, if Link can find him in a cave found at the top of a staircase in northeastern Hyrule, the Old Man gives Link the Letter, and tells him to bring it to the Old Woman.[1] When Link later does give it to the Old Woman, she accepts it and allows Link to start purchasing Potions from her Potion Shop.[2]

There are also certain caves across Hyrule that the Old Man is upset at Link for destroying the door. Inside these rooms, the Old Man asks Link to pay for the door repair.[3] This repair costs 20 Rupees. Their locations can be found here.

In Oracle of Seasons, the Old Man is seen frequently throughout Link's quest. He is first seen within the first dungeon of the game, Gnarled Root Dungeon. His message to Link is very short; he says, "Return light to unlit torches!"[4] This is a hint to Link that he can use his Seed Satchel and Ember Seeds (which he obtains a little later in the dungeon) to light torches in order to solve puzzles.

The Old Man can be constantly found in numerous underground bunkers across Holodrum. These bunkers are hidden by bushes. However, these bushes can be burnt away by Link's Ember Seeds, revealing the entrance. Inside, the Old Man will do one of two things depending on the location; he may give Link a large sum of Rupees, saying not to tell anyone.[5] He may also take Rupees from Link, saying he thanks Link for paying to fix the door.[6]

The Old Man also gives Link the Round Jewel, an item necessary to enter the Ancient Ruins. However, Link must have collected the first five Essences; if he has not, the Old Man simply mumbles how he awaits “one who knows many essences”.[7] If Link has collected the five essences, the Old Man is very happy to see Link, and gives him the Round Jewel.[8] This location is found in the southeastern corner of the Holodrum Plain, a location that is northwest from Horon Village and west from North Horon.

There is only one Old Man located in Oracle of Ages. In the Present, the cave is found at the Rolling Ridge Base. The Old Man can be found underneath a bush that is one screen to the right and one screen down from Mermaid's Cave. In the Past, the cave is found on the exact same screen. During the Past, the generous Old Man gives Link 200 Rupees. On the flipside, the Old Man in the Present charges Link 50 Rupees for the Door Repair charge.

The Old Man in Breath of the Wild greets Link shortly after he awakens from his 100-year slumber on the Great Plateau. He helps Link understand the basic survival elements essential to gameplay. He appears throughout the Great Plateau, teaching Link about campfires, cooking, hunting, how to survive the cold. He will award Link the Warm Doublet. After Link has completed the first four Shrines, he will reveal himself to be the spirit of King Rhoam, who died in the attack of Calamity Ganon 100 years prior. Link receives the Paraglider from him, which allows Link to leave the Great Plateau.

The Old Man resides in the Starting Screen cave gives the hero a Sword at the beginning of Week 1, and sends messages to them repeatedly, warning of dangers and giving other information; as well as periodically sending helpful spells at fixed times. They are accosted by Ganon at the end of Week 4, and the Evil King must be defeated to rescue him.

Various other Old Men also reside in other caves and dungeons; giving sword upgrades, bomb bag upgrades and offering the chance to gamble for money.