From Zelda Dungeon Wiki
Jump to navigation Jump to search
Want an adless experience? Log in or Create an account.
Old Zora 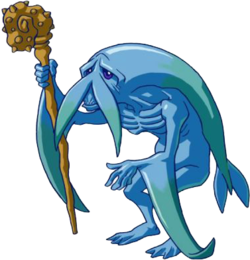 Artwork of the Old Zora

The Old Zora is a character from Oracle of Ages.

The Old Zora lives in Labrynna's Past on the Coast of No Return. He reveals to Link that he misses the sound and smell of the sea. He also reveals that he used to be the best Zora musician around and wishes he had an instrument to play and relive his youth.

Link can help the Old Zora by giving him the Sea Ukulele. In return, the Zora gives Link a Broken Sword that he says was given to the Zora long ago by a great Hero. When speaking to the Zora again, he obviously brushes off the fact that the sword is broken by talking about how good the Ukulele sounds, which contradicts another statement he makes, saying that he can fix anything.

The Broken Sword is the last item in the Trading Sequence of Oracle of Ages that eventually leads to Link obtaining the Noble Sword.