From Zelda Dungeon Wiki
Jump to navigation Jump to search
Want an adless experience? Log in or Create an account.
Carpenters 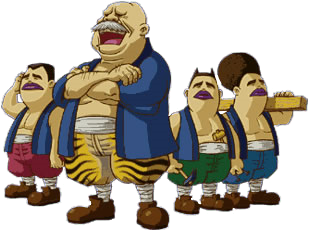 The Carpenters are recurring characters in The Legend of Zelda series. They are lead by a strong man named Mutoh. They can often be seen running through a small town getting the necessary materials to construct buildings.

The Carpenters are a group of men that are lead by the Master Craftsman, their boss. They appear in Kakariko Village in Ocarina of Time. They have been given the task by Impa to improve the village into a true city. They are seen working hard of sweat while they are trying to finish building up Kakariko Village. The Master Craftsman can be found standing next a tree, complaining about how lazy they are. The Carpenters can be seen running back and forth without seeming to be doing that much work. When Link is an adult, they have finished building the Shooting Gallery. Furthermore, they move to Gerudo Valley with a tent to live in, and they leave the Master Craftsman alone while they are joining the Gerudo Thieves. The thieves ignore them and decide to put them in a prison. Link later comes to rescue them. The Carpenters then go back to finish building the bridge.

In Majora's Mask, the Carpenters can be seen building in South Clock Town. When the Carpenters has a tower to build for the Carnival of Time, they chicken out and leave Mutoh alone to finish.

The Carpenters are a trio of men who, in the process of constructing a bridge to Symmetry Village, go on an extended break and wander about the Nuun Highlands, located north of Lynna City. Link meets their Boss Mutoh standing next to this unfinished bridge, located just West of the Nuun Highlands, shortly after returning from Crescent Island. Because of the rough terrain across the Nuun Highlands, the Carpenter Boss cannot go find his men himself. He asks if Link can locate and tell the three men to get back to work, but doing it alone will not be possible.

At this point, depending on if and where Link has found a Strange Flute, it determines which of the three Animal Companions he accompanies. Link discovers this animal lost within the Fairies' Woods who, after being helped to find their way out, gives Link their Flute. Whichever Animal Companion Link ends up with also causes the terrain of the Nuun Highlands to be altered, making it so that the specific animal's abilities help in navigating the area.

After Link finds all three Carpenters, they return to work on the bridge and finish it very quickly. With their job completed, the Carpenters and their Boss depart from Labrynna and head to their next job.

In The Minish Cap, the Carpenters are found in a small workshop, located in Hyrule Town. Their only purpose is to build houses for Nayru, Din, and Farora, but only after Link has fused Kinstone Pieces with certain characters.

At the beginning of the game, they also block roads, so that Link will be unable to get to them until later.