From Zelda Dungeon Wiki
Jump to navigation Jump to search
Want an adless experience? Log in or Create an account.
Nuun Highlands 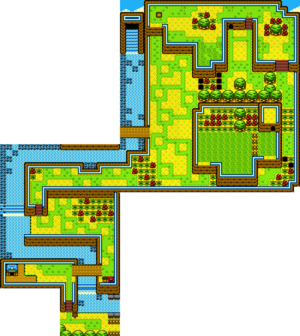 Nuun Highlands as they appear with Ricky

The Nuun Highlands is a location found within the Present of Oracle of Ages. The Highlands are located north of Lynna City and are only accessible after Link has acquired the Seed Shooter. The Nuun Highlands share a similar feature as the Natzu region from Oracle of Seasons in that the landscape will differ depending on which companion Link has with him.

Mutoh and the Carpenters

The south end of Nuun Highlands can be accessed after Link has acquired the Power Bracelet from Spirit's Grave. A rock at the west end of Lynna City can be lifted to reach the southern tip of the Highlands. At this point, Link can just pass right through and continue onward to the Fairies' Woods. The only area accessible in the southern portion of the Highlands is the Mask Shop.

Regardless of which companion Link chooses his mission is still the same. He will encounter Mutoh, the leader of the lazy Carpenters. The bridge that connects the Highlands to Symmetry Village is unfinished and the only way to fix it is to first find all three of the missing Carpenters that have gone on break. Link will then travel through the Highlands using his animal companion to find the three Carpenters.

The various landscapes are designed so that the make the best use of Link's particular character.

The area is filled with Buzz Blobs, regardless as to which companion Link has with him. There are also some River Zoras located near the water at the south portion of the Highlands. The area furthest to the south, just west of Lynna City does have a pair of Octoroks.